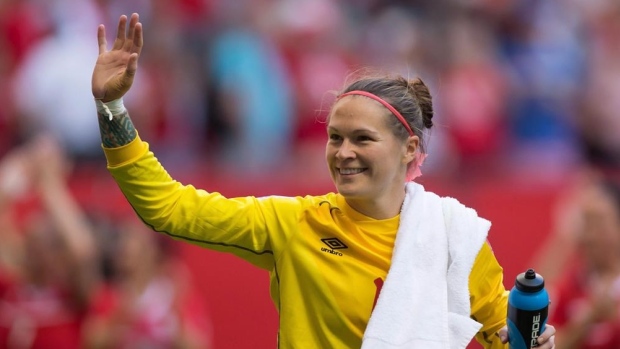 The 39-year-old from St. Albert, Alta., and Jonsdottir married Jan. 2. McLeod joined the Pride in 2020, one year before Jonsdottir.

“Both Gunny and Erin have been incredibly important members of, not only the Pride, but of the NWSL as a whole," Pride head coach Seb Hines said in a statement. "Their impact, skill and professionalism will be missed both within our locker- room and in our community, but this next step of their lives is an exciting one that we are also celebrating.”

McLeod, who previously played in the NWSL for the Chicago Red Stars and Houston Dash, made 28 appearances for the Pride with five shutouts.

At the club level, McLeod began her career with the Vancouver Whitecaps in the USL W-League in 2004. She has also had stints with the Washington Freedom and Sweden's side Dalsjofors GoIF, FC Rosengard and Vaxjo DFF.

She spent the 2020 season on loan with Ungmennafelag Stjarnan in Iceland due to the pandemic.

McLeod has won 119 caps for Canada and was part of the gold medal team at the Tokyo Olympics. She has been to four World Cup and three Olympics, also winning bronze at the 2012 Games in London.

Jonsdottir, 34, made 48 appearances for Orlando with five goals and two assists. She previously played for the Utah Royals.

This report by The Canadian Press was first published Jan. 24, 2023.