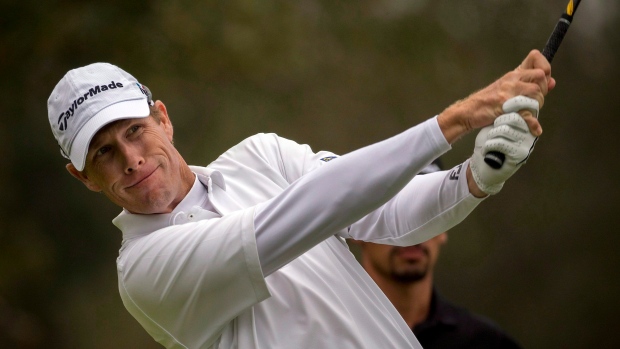 David Hearn starts his 21st year as a professional golfer on Thursday when he tees off at the Sony Open in Hawaii. In that time, he’s learned that you don’t always have to make big changes to improve.

“I’m just plugging away at the same stuff,” said Hearn, when asked of his approach to 2021. “There’s nothing really different this year for me. I’m just looking for consistency.”

Last year was somewhat of a struggle for Hearn, who made the cut in eight of his 20 starts. His best finish was a tie for eighth at the Bermuda Championship. But there were some optimistic signs, especially with his putting, which improved as the season went on. That’s been the one club that has troubled him in his career, especially since the anchoring ban came into effect at the start of the 2016 season.

“I feel like I started putting well at the end of last year,” said Hearn, “so now I’m just focused on hitting a lot of greens.”

The Brantford, Ont., product knows that to be successful means focusing on his strengths rather than chasing gains that may not be easily accessible and could possibly harm other parts of his game. While many on the PGA Tour are seeking more distance off the tee, he understands he has to choose a different way to get the ball into the hole.

“At 41, I’m not going to put on 30 or 40 pounds of muscle or gain a lot of ball speed,” he stated. “I’ve been pretty much the same for my entire career. But there’s still a place for me, and guys like me. There are still places where I can win. I might not be able to drive par 4s, but I can get it around in different ways.”

Hearn is playing with status for golfers who were exempt in 2019-20 but failed to make the FedEx Cup playoffs. Due to the cancellation of tournaments because of the pandemic, there was no relegation, and he has another season on the PGA Tour. The group will face several reshuffles during the season to adjust their priority ranking, meaning playing well early in the year is vital to gain more tournament entries.

The new year brings with it a continuation of protocols that have become familiar to PGA Tour players in the era of COVID-19. It means plenty of testing and precautions, something Hearn says the players and caddies have, for the most part, adhered to.

“We’ve had our share of cases, but I think we’ve done a good job of embracing it,” he stated. “And we’re still playing for full purses, which is great.”

This week in Honolulu included extra layers of precaution with more testing needed just to enter the state. Hearn said the area, which is normally buzzing with tourists escaping cold weather, is much quieter than normal. The restaurants where players would normally dine are closed except for take-out. As with most weeks, there’s a lot of room service.

Another adjustment for Hearn is being on the road without his family. It’s hard to be away from them for extended periods but the less they travel the better. There was an extended Christmas break that was spent in Florida and marked the first time he and his wife and children didn’t return home to Canada to celebrate.

“All of us miss our families, but the rest of the world is missing family time too,” he said. “We’re still in the middle of a pandemic.”

Hearn did have contact back in Brantford in recent weeks as he tried to help lobbying efforts to save Arrowdale Golf Course, a municipal nine-hole facility that faced closure by the city government.

As a 10-year-old, Hearn won his first tournament at the course. Many years later, as a fledgling pro, returned with the children of friends to equal the course record with a round of 29. The efforts didn’t work out. In December, the city agreed to sell the course to a developer and use the proceeds for affordable housing.

“I’m disappointed,” said Hearn. “It was a great course and a place where so many people started playing golf.”

This week, the golfer who represented Canada at the 2016 Olympics will test his game on a more challenging course, the Waialae Country Club, where he hopes to find that consistency he’s been seeking.

As he begins his third decade as a pro, the search continues.