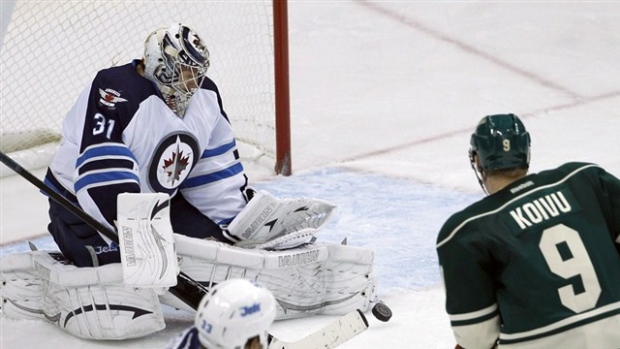 WINNIPEG - Ondrej Pavelec and Michael Hutchinson know how to share.

The Winnipeg Jets goaltenders have been rotating starts for the past 12 games, and there are no plans right now to end the two-starter approach.

After the team's optional skate on Monday, head coach Paul Maurice said the pattern will continue with Hutchinson's turn to start when the Jets visit Chicago for a game against the Blackhawks on Tuesday.

It's not a common practice in the National Hockey League to rotate goalies, and its perhaps less likely in this situation because Hutchinson is a rookie.

You'd think the veteran Pavelec would have his nose out of joint, but he said that's not the case.

"For me, it's not a competition at all," said Pavelec, whose NHL resume features more than 300 games.

"It's just get yourself ready for a game and that's all that you can control. Hutch is a really good guy. We're having fun."

During the 12-game rotation, Hutchinson is 4-1-1 and Pavelec 3-0-3. The veteran was in net for a 4-3 overtime loss to Philadelphia on Sunday.

"I definitely didn't think my first season would be going as well as it has, but at the same time, I didn't really come in with any expectations," said Hutchinson, 24.

"It's just been a fun season and I'm just enjoying every moment."

"The first year it's exciting, it's something different. The second year is always harder, but the way he's playing I think it's not going to be any different the next year or the year after.

"It's his rookie year and he enjoys playing well. He's really excited about playing. I think it's a pretty good story that a guy who played in the (ECHL) last year makes the NHL and plays unbelievable."

Hutchinson played last season for the Ontario Reign of the ECHL and then led the American Hockey League's St. John's IceCaps through to a loss to Texas in the Calder Cup final.

He also got into three games with the Jets and had two victories, one against the Boston Bruins who drafted him in 2008 and later let him go.

Hutchinson said his only goal this season was to make the Jets' roster.

He's proud of how he's performing, and thankful Pavelec has been supportive.

"Ondrej and I get along great," he said. "We both realize it's a team sport.

"Obviously, every goalie wants to be playing games, but you know from a young age that's not that the case. There's always two goalies on a team.

"Right now, we've been winning games during a little bit of a rotation so that's the only thing that matters. It doesn't matter who plays. When he's in the net, I want the team to win just as much as they do when I'm playing, so it's been working out well."

Pavelec noted he had good goaltending partners such as Chris Mason and Johan Hedberg when the franchise was in Atlanta and it's good he and Hutchinson enjoy each other's company.

Maurice said the duo has made his game planning a bit easier.

"When you have two guys that have played exceptionally well, you can't make a wrong call on whoever goes in," he said.

He'll make a change when he needs to, but so far that time hasn't come.

"I didn't start out this saying I'm going to roll the goalies this month," Maurice said. "It started with Mike's game got to the point that he deserved to be in and so did Pav.

"And it just seemed the right thing to do was put the guy who had a real good game last in next. And you look back, there was always a good game in behind so they deserved to be in a rotation."

The rotation actually helps during busy stretches and that's one of the reasons Pavelec doesn't mind sharing time in the crease.

"You've got that day off to mentally prepare for the next one and sometimes it's not a bad thing," Pavelec said.

"We'll see. At the end of the day it's always the coach's decision who's going to be in the net. Your job as a goalie is to be ready to go in no matter what."