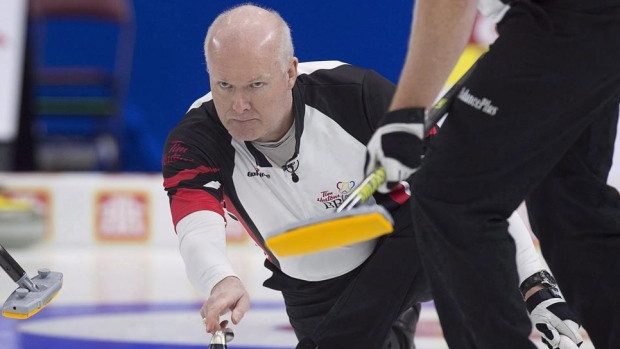 The one thing missing from Glenn Howard's impressive curling resume is an Olympic title. He'll need to win the upcoming Home Hardware Road to the Roar Pre-Trials to have a chance of getting to the 2018 Winter Games.

Howard, a four-time Brier and world champion, is one of the headliners in a 14-team men's field that includes former Brier champs Pat Simmons of Winnipeg, Jean-Michel Menard of Saint-Romuald, Que., and 2010 Olympic champion John Morris of Chestermere, Alta.

Shannon Kleibrink of Okotoks, Alta., who won bronze at the 2006 Turin Games, is in the 14-team women's field along with Sherry Middaugh of Coldwater, Ont., Krista McCarville of Thunder Bay, Ont., and Edmonton's Kelsey Rocque.

This will be the final Olympic cycle for Howard, who turned 55 over the summer. He plans to use alternate Adam Spencer at third after vice-skip Richard Hart pulled out with a knee injury.

Hart will handle coaching duties for the team instead.

"We're totally capable," Howard said from his hometown of Tiny, Ont. "Are we the best team in the world right now? No. But can we beat anybody? Absolutely. I'm a firm believer of that."

Two men's teams and two women's rinks from the Pre-Trials will qualify for the Dec. 2-10 Tim Hortons Roar of the Rings — the Olympic Trials — in Ottawa. The winning teams from the Trials will represent Canada at the Pyeongchang Olympics in February.

"As much pressure as it is, that's why we play the game," Morris said in a recent interview. "It's what you want to get to."

Teams will be seeded and split into two pools of seven for the round-robin competition. The top three teams from each pool will advance to the playoffs.

The first- and second-place teams will cross over to meet each other in the first round of the A-side. The winners will meet for the first Roar of the Rings berth.

The first-round losers will drop to meet the third-place teams in each pool in the first round of the B-side. The winners of the two games will then meet, with the winner taking on the A-side final loser for the second berth.

Canada is the reigning Olympic champion in both the men's and women's events.