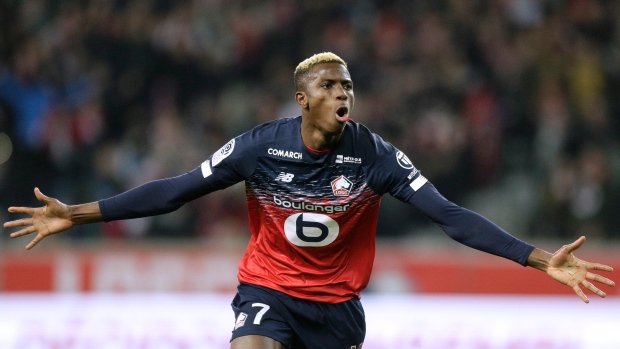 LILLE, France — Victor Osimhen's ninth goal of the season powered Lille to a 1-0 win over Brest on Friday, lifting his team to third in the French league.

The 20-year-old Nigerian gave Lille the lead in the 17th minute, but Lille couldn't score a second goal despite dominating the game with 10 shots on target to Brest's one.

Osimhen's nine goals in the league place him behind only the 10 each of Monaco's Wissam Ben Yedder and Lyon's Moussa Dembele.

Nimes lost Theo Valls after just five minutes when he was red-carded for a high tackle.

Depay gave Lyon the lead with a 16th-minute penalty after a foul by Nimes' Pablo Martinez.

Worse was to come for Nimes when Gaëtan Paquiez was sent off just before halftime after collecting two yellow cards in as many minutes.

Nimes' outnumbered team clung on until Depay made it 2-0 in the 65th. Houssem Aouar and Joachim Andersen added to Lyon's tally.

Lyon rose to fifth, while the heavy defeat meant Nimes dropped to 20th and last place on goal difference.