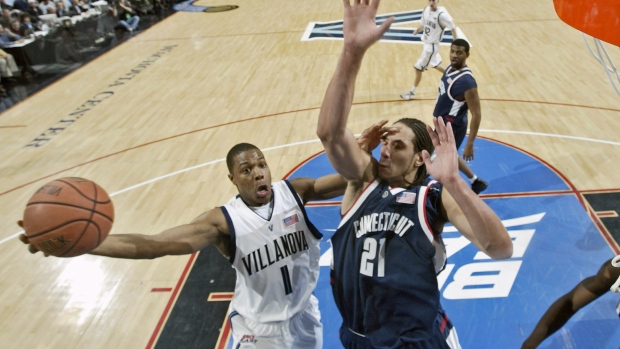 As part of the team's 100th-season celebrations, the Wildcats are retiring the jersey of Lowry (2004-06) and Ryan Arcidiacono (2012-16) at halftime in separate games next month. Lowry will be feted during the Feb. 26 game against St. John's.

"Kyle brought a toughness to our program that everyone has had to live up to in the years since," Wildcats head coach Jay Wright said. "We're so proud of all his basketball accomplishments, but mostly the man, father and husband that he's become."

Lowry is a five-time all-star, Olympic gold medallist, and led the Raptors to a historic NBA championship last season. At Villanova, he was named 2005 Philadelphia Big Five Rookie of the Year despite missing the season's first seven games after tearing a knee ligament. As a sophomore, he was a second team All-Big East choice and in his two seasons the Wildcats were 5-2 in NCAA Tournament play, advancing to the 2005 NCAA Sweet 16 and the 2006 NCAA Elite Eight.

"Ryan watched Kyle play and learned from him," Wright said on the Wildcats' website. "He became one of the great Villanova leaders of all-time. His tenacity, intelligence and charisma set an example for all the Villanova guards who followed him."

Arcidiacono, now a member of the Chicago Bulls, was a four-year starter who helped lift the Wildcats back to the NCAA Tournament as a freshman in 2012-13.

With the addition of Lowry and Arcidiacono, the Villanova men's basketball team will have retired 23 jerseys — 18 players, three coaches and a long-time trainer.