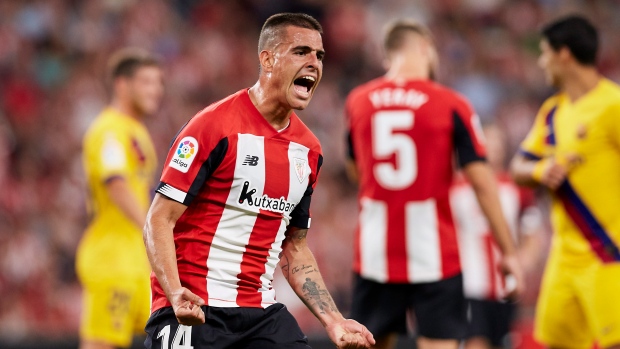 MADRID (AP) — Villarreal's struggles in the Spanish league continued with a 2-1 loss at Athletic Bilbao on Saturday, with striker Gerard Moreno not finishing the game because of an injury.

Villarreal was coming off a 4-1 away win over Young Boys in the Champions League, but Unai Emery's team now has lost two in a row in the Spanish league and sits only 13th in the standings.

Raúl García and Iker Muniain scored a goal in each half for Athletic, which moved to seventh place with 16 points, four points behind leader Real Sociedad.

Francis Coquelin scored Villarreal's lone goal in the 32nd to even the match at the San Mamés Stadium.

Valencia salvaged a 2-2 draw at home against 10-man Mallorca by scoring twice in second-half injury time.

Mallorca took a 2-0 lead in the first half but the hosts hit back with goals by Gonçalo Guedes three minutes into stoppage time and José Luís Gayà five minutes later.

Mallorca played a man down from the 55th after South Korean midfielder Lee Kang-in, a former Valencia player, was sent off with a second yellow card.

The result extended Valencia's winless run to six matches, leaving it in 10th place. It has three draws and three losses in its winless streak.

Mallorca is 12th and has won only once in its last seven matches.

Alavés won 2-0 at Cádiz for its second victory of the season, with Joselu scoring early in the first half and early in second-half stoppage time. Both teams remain near the bottom of the standings.

Darío Benedetto scored in the 84th to help 14th-place Elche salvage a 2-2 home draw against 11th-place Espanyol, which was looking for its third straight win.