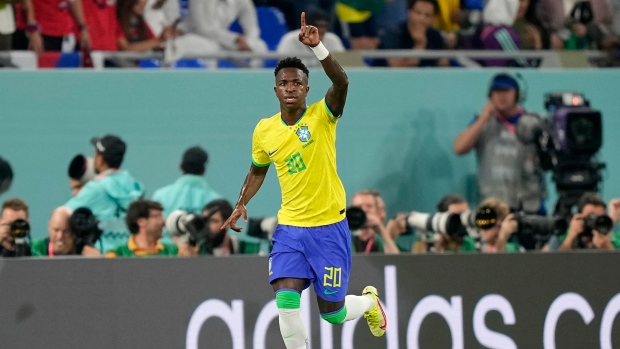 Vinícius Júnior arrived in Qatar without knowing if he was going to get a chance to start for Brazil, but heading into Friday’s quarterfinal match against Croatia, no one questions his spot in the lineup or his importance for the team.

He said Ancelotti was one of the people who gave him guidance ahead of soccer’s biggest tournament.

“I talked with Ancelotti and he gave me a lot of advice to help me become a starter with Brazil. He gave me a lot of confidence,” the 22-year-old Vinícius Júnior said Wednesday. “He was always was tough with me when he needed to be. He is like a father to me.”

Vinícius Júnior was often questioned at Madrid while Zinedine Zidane was the coach, but quickly established himself as a starter with Ancelotti in command. The Brazil forward said the Italian coach is always sending him messages.

“He is good not only with the technical aspects of the game, but also with how he deals with his players,” Vinícius Júnior said. “I have been improving a lot and Ancelotti has helped me with that. He and (Brazil coach) Tite are very similar and they talk to each other a lot.”

Vinícius Júnior, who has a goal and two assists in the three World Cup games, said he also learned from Madrid midfielder Luka Modric, who will be one of his opponents on Friday at Education City Stadium.

Vinícius Júnior said the pass he gave for Lucas Paquetá’s goal in the round of 16 against South Korea, using the outside of his foot, was something he learned from Modric at Madrid.

“He is always teaching me things, on and off the field,” Vinícius Júnior said. “He helps me every day, making sure I’m always improving. He is a reference to me, playing at a high level at 37 years old, that is something rare. I’m happy that I’ll be playing against him, and let the best team win.”

Within Brazil’s national team, Vinícius Júnior said he also gets advice from Neymar.

“He told me how the World Cup is different than anything else,” Vinícius Júnior said. “He told me that, and I always remember it. And when the national anthem played, I realized what it all meant."

Vinícius Júnior was among the Brazilian players criticized for their dance celebrations at the World Cup. He had already been targeted because of that while with Madrid. But he promised even more dancing if Brazil keeps succeeding in Qatar.

“The goal is the most important moment in soccer, not only for those who score them but for the entire country," he said. “We still have many celebrations left, and hopefully we can keep scoring and dancing like this until the final.”