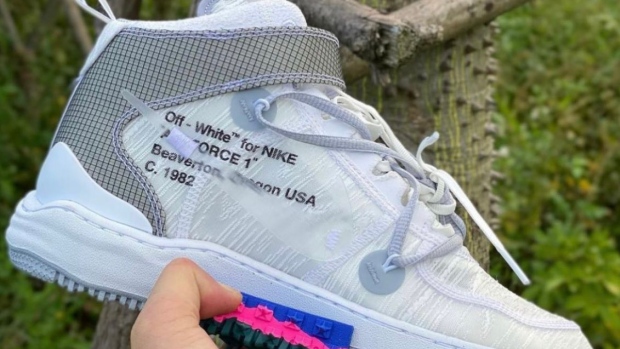 Virgil Abloh’s Off-White brand and Nike seem to be working together all the time, and even before the big release of the Off-White x Air Jordan 2, it appears that a new Air Force 1 Mid collaboration project between the two giants has been revealed.

According to an Instagram post by Py_Rates, two new editions of the Off-White x Nike Air Force 1 Mid in white and black colourways are coming early next year.

Early depictions interestingly suggest that co-branding text will appear on the lateral side panels instead of the usual medial printing. The signature Off-White branding in Helvetica font is featured on the shoe’s medial wall in black and the heels are supported with a white mold.

Interest in the AF1 Mid sneaker has been similar to the fate of the Air Jordan 1 Mid in that their sales have paled in comparison to their high and low top counterparts that are more popular. Abloh’s true test in this new rendition of Off-White x Nike AF1 Mids will be to revive the popularity that these mid-top sneakers once had.

A release date for the Off-White x Nike Air Force 1 Mid has not yet been revealed, but is likely that more information around these new kicks will surface in the coming months.