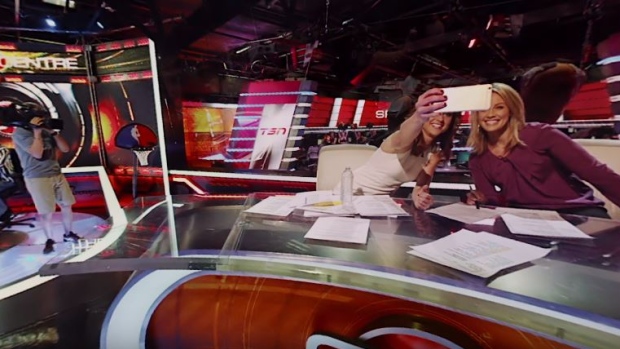 At Wednesday's #CTVupfront sales presentation in downtown Toronto, TSN marked its first foray in virtual reality with the debut of a 360-video that immerses viewers in the SportsCentre newsroom – with a rather unique twist...

In this three-minute virtual reality video – a TSN first – fans go behind-the-scenes in the SportsCentre newsroom as co-anchors Kate Beirness and Natasha Staniszewski prepare to go live to air while zany shenanigans unfold all around them (see below for a list of the unconventional cameos that take place in TSN’s 360 video).

- If you’re on a mobile phone or tablet, a YouTube app is required (copy this code to the YouTube app: Zqx05vBRZhE)

- If you’re on desktop, click on the embedded video below (the latest version of Chrome, Opera, Firefox, or Internet Explorer is required)

- You can move around the SPORTSCENTRE newsroom by simply panning the embedded video, using a headset or dragging the navigational controls.

"By pulling back the imaginary curtains of SportsCentre, TSN is embracing the exciting new world of virtual reality. This is part of our ongoing commitment to broadcasting innovation, which was reinforced earlier this year when we broke new ground by producing North America’s first live 4K broadcast," said Stewart Johnston, President of TSN. "We hope SportsCentre fans enjoy this new experience and have a good laugh at some of the surprises we’ve planted throughout this immersive experience."

Beginning today, fans across Canada can access this unique VR experience using a headset, by panning their phone or tablet, or dragging their device’s navigational controls.

By the Numbers: Cameos Made in TSN’s 360-video

Featuring a variety of cameos – from a professional athlete to friendly mascots, and even a farm animal – here’s a look at who you might spot in TSN’s 360-video:

- 15 crew members, including a roving cameraman, a producer on a time-crunch and about a dozen highlight producers
- 4 cheerleaders from the Hamilton Tiger-Cats
- 4 mascots, featuring two racing Prime Ministers and the Spartacat from the Ottawa Senators, plus the BarDown.com Dinosaur
- 2 SportsCentre anchors, Kate Beirness and Natasha Staniszewski
- 1 friendly llama, returning to the TSN studios for a second on-air cameo
- 1 professional athlete, Toronto Argonauts defensive end Ricky Foley, who doubles as a stressed-out newsroom rookie