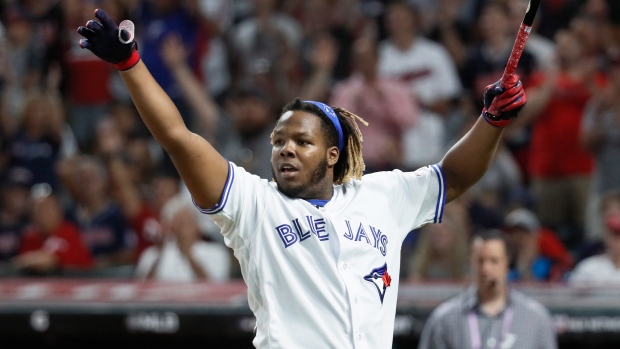 Vladimir Guerrero Jr. will not go down as the champion of the 2019 MLB Home Run Derby, but the numbers he posted in what was ultimately a defeat at the hands of New York Mets rookie Pete Alonso might just be even more impressive than raising the trophy.

Guerrero Jr. will be leaving Cleveland with a few derby records in his back pocket. The 91 total home runs he hit in all three rounds, including both an overtime and swing-off against Los Angeles Dodgers outfielder Joc Pederson, is the most ever in a single contest. He also had 40 in the second round, which beat the record for most in a single round that he had originally set at 29 during his opening salvo.

The 20-year-old additionally led the night with the longest home run, a 488-foot blast in the second round, the most homers of 450 feet or more with 17 and the hardest hit home run, which left the field at 114 mph.

The Blue Jays rookie was the fifth player to enter the derby with fewer than 20 career home runs and is the only member of that group to advance out of the first round. Mike Piazza in 1993, Nomar Garciaparra in 1997, Evan Longoria in 2008 and Kris Bryant in 2015 were all bounced in the opening round, with the first two players failing to hit even one home run.

The second-round battle between Pederson and Guerrero Jr. will go down as the most prolific head-to-head round in the history of the derby, with the pair combining to hit 79 homers that according to Statcast, travelled a distance of nearly 32,000 feet.

Pederson does leave with one consolation after exiting the competition: He is now the all-time leader in career Home Run Derby bombs, with 99 in his two appearances. Guerrero Jr.’s 91 homers have him second on the all-time list, ahead of Todd Frazier’s 91 and Giancarlo Stanton’s 83.