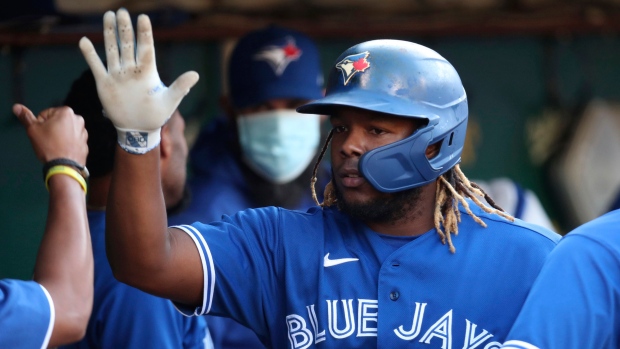 We tend to focus so much on Vladimir Guerrero Jr.’s offence because he can be a force with a bat in his hands.

For the longest time, the only attention that has been paid to his defence is identifying his inadequacies initially as a third baseman, then again when he made the move to first base last season. But he deserves to have his hard work acknowledged. He is a much better first baseman this season and it is due to his desire to be a better third baseman.

Much has been made of Guerrero’s weight loss and conditioning. He is in much better shape this year and the results are showing. He had hoped to be able to play third base again, and the Jays did a good job by leaving open that possibility of that happening to reward his motivation to get in shape. But there wasn’t any configuration of the roster that realistically had him as the everyday third baseman.

The great news is that Guerrero’s improvement offensively and defensively has reinforced the benefit of his better physical condition. The positive results offensively are clear, as he is among the leaders in a number of statistical categories.

Defensively, he is making plays that he couldn’t even imagine a year ago. Playing defence is as much about footwork as it is soft hands to catch the ball. His footwork is dramatically improved.

Another reason for his improved defensive performance is experience. Guerrero wasn’t properly prepared last season to play first base, but his poor physical condition upon reporting for Summer Camp left the Jays no other choice. He has had to experience every play at least once to learn what the angles and footwork are like on the right side of the infield. Now he knows what to expect and what to do when it happens.

It is hard to imagine that he would have doubts about his abilities but it is natural for even the best players to wonder whether they’ll ever figure things out. Guerrero’s self-confidence is back. He has the same posture and confident look that he showed in the minor leagues. He moves freely without hesitancy this season in a way that we didn’t see for a couple of years.

It is hard to know cause and effect when a player’s confidence wanes. Did his struggles on offence affect his defence or was it the other way around? Did he just have doubts about all that he had to overcome? Did the way he feels about his new physique bring back his swagger, or was it the success that he had because of his new body?

The mental part of the game is impossible to quantify, but it is at times more important than the physical skills of a player. How a player feels about himself and how he sees himself affect how he plays. The best players have a confidence in themselves that borders on cockiness. They don’t let mistakes or failures change the way they feel about their abilities.

Guerrero has his swagger back and he looks like that vision that we all had of what he could be for the next 15 years in Toronto. How he got there matters less than the fact that he has arrived. Now he needs to hold on to who he is as a player and not let go.

Jays get it right with Ray

So far, one of the best signings of the off-season is Jays lefty Robbie Ray. Toronto acquired him at the trade deadline last year and got to know him and his skills.

They moved quickly in the off-season to sign him, locking him up on Nov. 7, 2020. This was a great move for both sides as it gave him time to continue working with the Jays’ staff. He is in the best shape of his career and his delivery is as refined as it has ever been.

Ray had always been an enigma. He had great stuff – at times he was unhittable ­–but he never threw enough strikes to maximize his ability and walked far too many hitters.

He has been coveted by teams for years. Every club thinks they are smarter than the others and believes they can take a guy like Ray and fix him. The Jays have actually done it.

This is the best version of Robbie Ray that I’ve seen. He has thrown 24.3 innings in his past four starts and has struck out 33 batters while walking none. He is pitching like a solid No. 2 starter behind Hyun-Jin Ryu. If  he keeps throwing strikes, he will keep finding success.

Now the Jays need to get Steven Matz back on track again like he was in his first four starts when he had a 2.31 ERA.

The New York Mets have won seven straight games and are in first place (18-13) in the NL East.

They recently placed ace Jacob ​deGrom on the injured list with lower back tightness. They are going to be very cautious with him as he is arguably the best pitcher in baseball today.

In his absence, the Mets are counting on two former Jays to keep them rolling. Marcus Stroman (3-3, 2.01 ERA) and Taijuan Walker (3-1, 2.20 ERA) have done a great job this year, plus reinforcements are on the way. Former Blue Jays’ farmhand Noah Syndergaard will be back soon from Tommy John surgery, while righty Carlos Carrasco will return soon from a hamstring injury suffered in spring training.

The Mets have a few other former Jays on their roster: LHR Aaron Loup, RHR Sean Reid-Foley, outfielder Kevin Pillar and infielder Jonathan Villar. They might as well be an affiliate of the Blue Jays.

The Mets are also hoping that their recently acquired and extended shortstop Francisco Lindor, who is starting to heat up, will lead them offensively and defensively.

Lindor got off to a horrible start in New York. He wasn’t hitting and he wasn’t his normal smooth self on defence. Mr. Smile hasn’t been smiling too much so far.

Much of his struggles are from trying too hard to deliver on his $341 million mega deal, but he also looks too bulked up and slow. Lindor’s game in Cleveland was about quickness and free-flowing actions. He looks like he bulked up in the weight room and it has reduced his quick-twitch movements.

He no doubt believed that working hard would bring better results. But improvement comes from working hard and working smart. His hard work has limited him, unfortunately. He does look like he is loosening up some and I suspect it will improve as it is hard to spend much time in the weight room during the 162-game season.