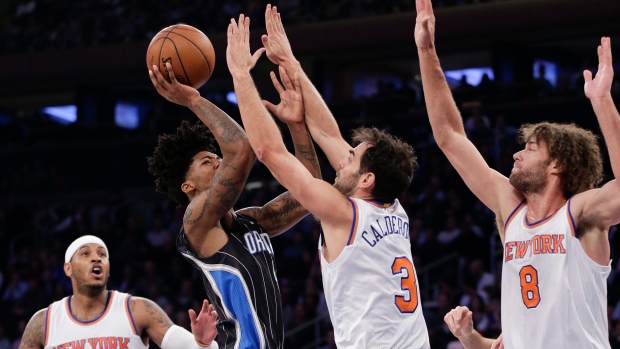 NEW YORK, N.Y. - It wasn't just winning the game. It was keeping the lead that showed the Orlando Magic how far they have come.

Nikola Vucevic tied his season high with 26 points and grabbed nine rebounds, leading the Magic to a 107-99 victory over the New York Knicks on Monday night.

The game was close all the way, with the Knicks never leading but never trailing by more than eight until the Magic made a late 11-2 run. New York was repeatedly within a basket of tying or taking the lead in the fourth, but Vucevic and the Magic kept coming up with timely plays.

"A lot of times it was the opposite scenario last year, where we were at the end but we couldn't close it out," forward Tobias Harris said. "But now we're starting to really grow and close out these games."

Vucevic had a pair of baskets and Evan Fournier added a 3-pointer and another basket in the clinching spurt after the Knicks had cut it to 93-92 with 3:25 left. Victor Oladipo finished that decisive run with a breakaway dunk that made it 104-94 with 1:07 to go.

Harris scored 20 points and Fournier had 16 for the Magic, who rebounded from Sunday's loss to Atlanta to win for the fourth time in five games.

"It's good for us, especially after a tough loss last night and coming off the back-to-back," Vucevic said. "To respond this way was great for us. Shows growth, shows we believe in ourselves and I thought we played really well tonight."

Lance Thomas was 9 for 9 and tied his career with 24 points for the Knicks, who had won four in a row and missed a chance to move above .500. Carmelo Anthony scored 23 points despite tweaking an ankle in the second half.

"They were hitting important shots at important moments and they were able to maintain the lead, and at the end they just played better," Knicks rookie Kristaps Porzingis said.

Starting guard Elfrid Payton didn't play in the second half because of a sore left ankle, but Fournier handled the ball more and Oladipo and rookie Mario Hezonja finished in double figures off the bench as Orlando shot 51 per cent from the field.

Porzingis had nine points and eight rebounds but shot just 3 for 12.

Magic: A night later, coach Scott Skiles was still hard on the Magic's defensive effort in their 103-100 loss to Atlanta on Sunday. "I said laughable after the game, so I'm going to stick by that," Skiles said. "It was." ... The Magic pledged $1.5 million Monday toward a new academic building for the University of Central Florida's downtown Orlando campus.

Knicks: Reserve forward Kyle O'Quinn missed the game against his former team with a sprained right ankle. He was hurt Saturday against Chicago and coach Derek Fisher said he was better but still had some swelling. "Obviously with it being his former team, those are nights that guys circle on the calendar, so that tells you a lot about where he is today," Fisher said.

Robin Lopez (6 for 6) was also perfect from the floor for the Knicks. The team record of 11 makes without a miss is shared by Bernard King and Johnny Newman.

Shaquille O'Neal was among the candidates for the Naismith Memorial Basketball Hall of Fame's class of 2016 announced Monday, and both coaches in this game played with him. Asked his thoughts about O'Neal, Fisher said: "I mean, my thoughts are that he'll get in." Skiles remembered when O'Neal got to Orlando as a rookie in 1992. "It took about 10 seconds to realize, if that, not very long (that) he was clearly a can't-miss," Skiles said.

Fans were chanting for Porzingis to re-enter the game in the fourth quarter, but he remained on the bench for a long stretch while Fisher stuck with Lopez and Thomas around Anthony.

"Physically, Robin can size more with Vucevic. Obviously, Lance Thomas was playing well at the (forward) spot. So who do you take out?" Fisher said.