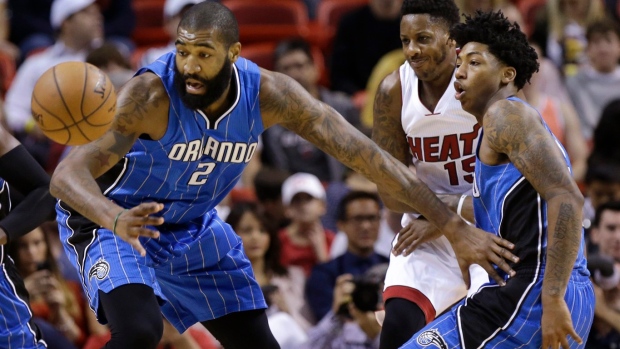 MIAMI - Victor Oladipo calls Dwyane Wade a mentor. And when they've gotten together for their off-season workouts, the Orlando guard has obviously been paying attention.

Oladipo scored or assisted on Orlando's final nine points, Nikola Vucevic led all scorers with 26 and the Magic snapped a 10-game drought against Miami by topping the Heat 102-101 on Monday night — escaping when Wade's 20-footer missed at the end.

"He's a great player," Oladipo said of Wade, who has ties to the Magic guard because both played college ball under Tom Crean at Indiana and Marquette, respectively. "When it's all said and done, he's going to be one of the greatest to ever play. He already is to me. It's great to have him as a mentor and a close friend."

Wade had 15 of his 25 points in the fourth quarter, the third time he's scored that many in the final 12 minutes at home this season. Miami is 0-3 in those games, fell to four games under .500 for the season and is a staggering 6-12 at home.

Oladipo scored 22 points, Tobias Harris had 18 and Channing Frye finished with 13 for the Magic, who are two games behind Miami now for the No. 8 spot in the Eastern Conference.

For Miami, Danny Granger had 21 points and Chris Bosh scored 20 in his return after missing eight games with a strained left calf.

Oladipo tied it at 101-101 when he drove by Wade and scored with 45 seconds left. Wade missed a jumper on the next possession, and Oladipo made the first of two free throws with 6.6 seconds left to give the Magic the lead.

Wade had a good look at the end, but missed.

Miami led by 10 in the third quarter before the Magic got back on track and set up the back-and-forth final minutes.

Harris scored 11 points in the third, including a 3-pointer with 1.8 seconds left in the quarter to cap a nine-point, 80-second run for the Magic that tied the game at 77-77 entering the fourth.

"That was a really fast run in less than two minutes," Heat coach Erik Spoelstra said. "But that's competition."

Magic: Vucevic has reached double-digits in scoring in all 28 of his games this season. ... Orlando played its 21st road game — the most so far in the NBA. The Magic have played the second-fewest home games, just 13 to date. Their next three are all at home. ... Orlando scored the first seven points of the game, then allowed the first seven of the second half.

Heat: Wade's first field goal was his 4,000th (including post-season) at AmericanAirlines Arena, more than any other two players combined. ... The Heat finished their seven-game homestand 2-5. ... C Hassan Whiteside scored eight points, notable because it matched the third-most in Heat history for someone taking no more than one field-goal attempt. He was 1 for 1 from the field, 6 for 11 from the line. ... With Bosh and Chris Andersen starting, it was Miami's 14th lineup of the season, in 32 games.

Vucevic had played Miami 10 previous times, never emerging with a win despite some big numbers. He averages 19.9 points and 14.2 rebounds now in his last eight games against the Heat.

Heat: At Indiana on Wednesday.