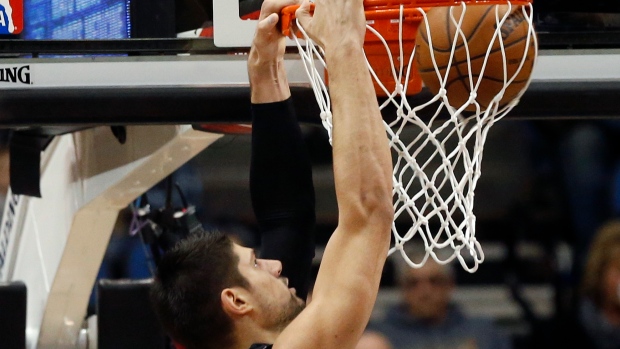 MINNEAPOLIS - The entire NBA has had a hard time slowing down Nikola Vucevic this season.

Against the undermanned Minnesota Timberwolves who were missing their three best big men, he was unstoppable.

Vucevic scored a career-high 37 points and grabbed 17 rebounds to power the Orlando Magic to a 97-84 victory over the Timberwolves on Friday night.

"I wanted to be aggressive," Vucevic said. "We had a size advantage in the paint and I wanted to take advantage of it. We needed this win after a rough stretch."

Tobias Harris added 25 points and 12 boards to help the Magic snap a three-game skid. They shot just 43.5 per cent and turned the ball over 19 times. But a 53-30 edge on the glass and a 21-6 advantage in second-chance points proved to be enough against the banged-up Timberwolves.

"If he was on another team, we'd probably be talking about him as one of the top centres in the league," Wolves coach Flip Saunders said of Vucevic. "He's got a nice touch shooting the ball."

Andrew Wiggins scored 22 points for the Timberwolves, who once again had only eight healthy players. Kevin Martin returned from a six-game absence with a strained hamstring, but had 12 points on 3-for-12 shooting.

The Wolves (16-60) have dropped six straight games and have lost at least 60 for the ninth time in franchise history.

"Our biggest thing right now is young players that have never gone through this," Saunders said. "They're in uncharted waters. We're trying to get them to push through and understand what this is all about and what they have to do to be prepared."

Minnesota was missing Ricky Rubio, Kevin Garnett, Gorgui Dieng, Shabazz Muhammad, Anthony Bennett, Gary Neal and Nikola Pekovic because of injuries, and the Timberwolves had no answer for the strength of Harris and Vucevic in the paint.

Vucevic hit 10 of his first 12 shots, using superior size and strength to have his way with Justin Hamilton, Adreian Payne and Chase Budinger. He had 26 points and 11 rebounds in his first 27 minutes, and Harris' aggressiveness in going to the glass was overwhelming the short-handed Wolves.

"From the start, his intensity, I loved the mentality he had tonight," Magic coach James Borrego said. "He had an aggressive mentality tonight."

The Timberwolves took advantage, cutting the deficit to three at 76-73 with 7:30 to play.

That's when Harris and Vucevic, who made 18 of 25 shots, took control again. The big man scored on a putback and Harris hit two corner 3-pointers for an 86-74 lead with 4:37 to go, and the Magic never looked back.

"We play hard, but if we get down, we don't have enough juice to come back in the fourth quarter," Wiggins said.

Magic: Elfrid Payton was all over the place in the first quarter, which wasn't always a good thing. Late in the period, he leaped for a rebound, but tipped it into his own basket. ... Borrego said Evan Fournier, who has missed 17 games with a hip injury, is getting closer to returning. He said they hope to have him back on the court soon.

Timberwolves: Pekovic termed the surgery he will have to repair his right Achilles a last-ditch effort to get healthy. He has been plagued by foot problems for the last two years and will not play the rest of this season. ... Wiggins lost out on the Western Conference rookie of the month award for March to the Lakers' Jordan Clarkson. It was the first time this season he has not won it.

The Magic's rookie point guard was just 4 for 9 from the field, but he still had 10 points, 10 assists, six rebounds and four steals. His ability to attack Minnesota's porous defence from the perimeter and break it down as he got into the lane was one of the keys to the game.

"The numbers don't show it, but he had a great impact on the game tonight," Borrego said. "He controlled it really from wire to wire."