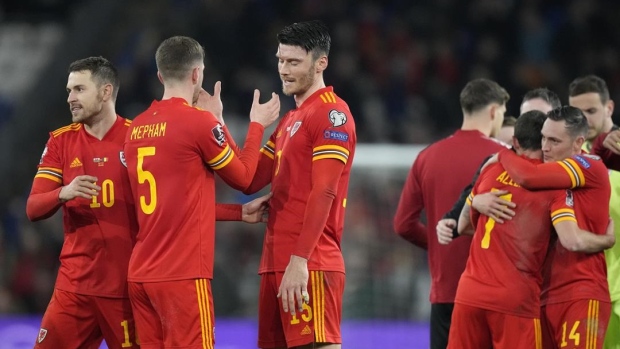 CARDIFF, Wales (AP) — Wales secured a seeded spot in the World Cup playoffs on Tuesday by holding Belgium to a 1-1 draw after rallying from a goal down in their final qualifier in Group E.

Wales was guaranteed a playoff spot before kickoff through its Nations League results and the draw ensured that Rob Page's players will get a home draw in the playoff semifinals in March.

Unbeaten in the group, Belgium secured the top spot and direct qualification last weekend with a 3-1 win over Estonia.

The Czech Republic beat Estonia 2-0 on Tuesday in the group’s other match and finished third, one point behind Wales. The Czechs take one of the two playoffs entries for teams that won a Nations League group last year.

“It’s massive," Wales midfielder Aaron Ramsey said. “Full credit to the boys who’ve put in a massive shift again against top opposition. We always believed we could get a result, especially at home with the fans behind us.”

The 12-team playoffs will decide who joins the 10 European qualifying group winners at the tournament.

De Bruyne captained a Belgium team deprived of many regular starters featuring just five players from the side that defeated Estonia.

Without the injured Gareth Bale, the hosts got off to a strong start with high pressing. But their early moves left the Belgian defense unimpressed as 21-year-old Arthur Theate — on his international debut — and Dedryck Boyata efficiently closed spaces.

Belgium gradually got into the match and took the lead in the 12th minute when De Bruyne slotted home with a low shot past goalkeeper Danny Ward after defenders failed to clear an effort at goal from Axel Witsel.

Technically superior to their rivals, Roberto Martinez’s players controlled the remainder of the first half and threatened with counterattacks as Wales gave away the ball too easily in midfield.

The hosts snatched an equalizer against the run of the play soon after the half hour after Witsel and Theate both failed to clear a cross from Daniel James that dropped to Moore, who concluded the move with a precise shot for his eighth Wales goal.

Thorgan Hazard came close of restoring the Red Devils’ lead in the 41st minute from De Bruyne’s corner kick, but his curled volley from the edge of the era hit the post.

The match was more balanced after the interval as Wales pushed hard toward the end but could not find a cutting edge.