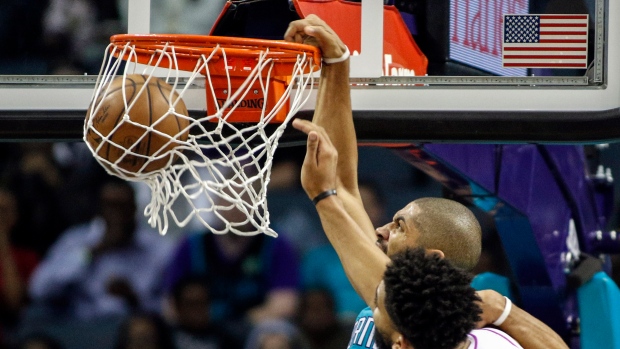 CHARLOTTE, N.C. — Miles Bridges had plenty of reasons to party.

He turned 21 years old, his college team, Michigan State, won its first-round game in the NCAA Tournament and he recorded his first career NBA double-double.

So what was the rookie going to do to celebrate?

"Go to bed," Bridges said with a smile.

"I think I need to celebrate my birthday every game. I was just trying to get the rebounds and stay aggressive," Bridges said. "That's what got me going today."

Jeremy Lamb added 13 points and 10 rebounds for the Hornets, who won for only the fifth time in the last 16 games.

Hornets coach James Borrego turned to his youth after entering the night 3 1/2 games behind the eighth-place Miami Heat in the Eastern Conference and with the team's playoff hopes fading fast.

Youth was served as Charlotte outscored Minnesota 17-6 on fast-break points.

"We are trying to win games," Borrego said. "This isn't throw in the towel, we're out of the playoffs. There isn't any of that going on right now. Number one, we're going after every single win. But I wanted to take a look at some different combinations and some different bodies out there."

Borrego said nothing is set in stone moving forward when it comes to his rotation.

Towns came in averaging 30.1 points, 12.0 rebounds and 3.6 assists this month after averaging 30.9 points, 13.8 rebounds and 4.1 assists in February. But the Hornets were determined not to let him beat them, swarming with the 7-foot, two-time All-Star centre with multiple players almost every time he got the ball in the second half.

He finished 7 of 17 from the field and had six assists and four turnovers.

Said Minnesota coach Ryan Saunders: "That is something that we expect from the level that Karl has played at and we expect that. We are going to continue to get better as a team. We will learn from that in terms of getting help in areas and also making plays out of there, too."

Charlotte built its first double-digit lead at 96-86 midway through the fourth quarter when Walker went coast-to-coast and scored on a Eurostep layup between two defenders. The Timberwolves never mounted a serious challenge after that point.

Hornets: Michael Kidd-Gilchrist sat out with a concussion. He is out indefinitely. ... Bench outscored Minnesota 46-26.

Monk was finally a factor again for the Hornets, scoring 14 points on 4-of-7 shooting from beyond the 3-point arc. This season has been a struggle for shooting guard from Kentucky who has seen his playing time reduced because of his defence.

WIGGINS ON THE DRIVE

Andrew Wiggins finished with 20 points on 8-of-15 shooting and fared well driving to the hole.

"I feel like I started the game aggressive trying to get downhill," Wiggins said. "I feel like that helped me in the long run."