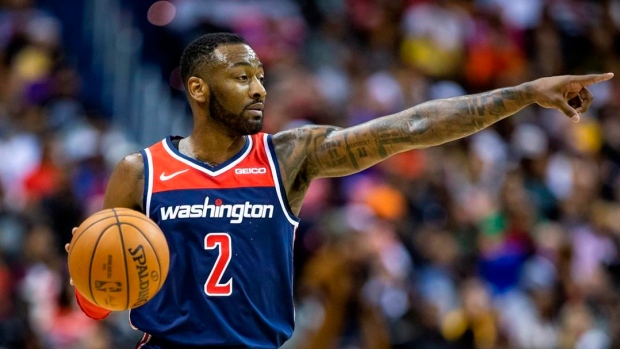 What they didn’t discuss, according to Sheppard, was the possibility of Washington dealing Wall elsewhere.

“There’s no plans to trade John,” were the first words spoken by Sheppard during a video conference Monday, when most questions from reporters were about the five-time All-Star who was the No. 1 overall pick in the NBA draft.

Wall missed all of last season, and most of 2018-19, too, with injuries to his left heel, then Achilles tendon, and reports surfaced in recent days that he requested a trade.

Sheppard downplayed that with training camp set to begin next week, saying Wall “didn’t request” to be moved when they spoke Monday.

He said he and Wall speak “pretty much every other day” and characterized their relationship as “very, very close.”

And while Sheppard reaffirmed that his plan is to build around shooting guard Bradley Beal -- whose scoring average of 30.5 points last season was second in the league behind James Harden -- the GM repeatedly emphasized that he is eager to see his team’s backcourt combo reunited.

“We’ve been pointing to this time for a long time, to try to see how we get those guys back on the floor together, because when we were together last, they were pretty darn good,” Sheppard said. “One of the best backcourts out there.”

The Wizards went to the post-season four times in five years during one stretch. But over the past two seasons, Washington lost 50 games, then 47, and missed the playoffs.

“It’s a new story now with John and Bradley. ... It’s not a sequel. They haven’t played together in two years, but they both look forward to playing with each other,” Sheppard said. “That’s where we’re at and that’s where we move onto.”

He explained some of his free-agency acquisitions through the prism of how the signings will work with Wall and Beal.

That includes the outside shooting provided by Davis Bertans — who re-signed for $80 million over five years — the veteran backup guard experience offered by Raul Neto, and “that toughness, that presence that we need” brought by centre Robin Lopez, whose role will be as a backup to starter Thomas Bryant.