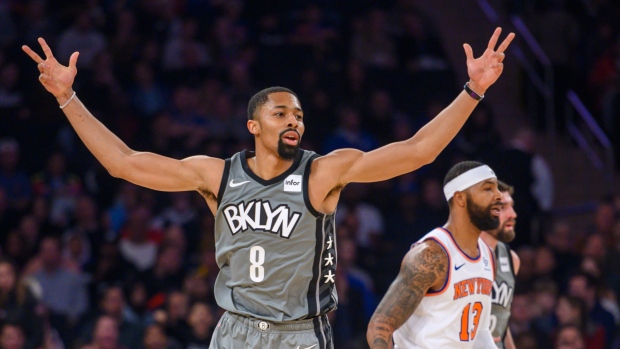 The Washington Wizards have agreed to a $62 million, three-year deal with guard Spencer Dinwiddie, according to a person with knowledge of the agreement.

The person, who spoke to The Associated Press on condition of anonymity Wednesday because the deal had not been announced, said Dinwiddie is heading to the Wizards in a sign-and-trade.

The 6-foot-5 Dinwiddie joins a backcourt that's being vacated by Russell Westbrook after Washington agreed to deal Westbrook to the Los Angeles Lakers.

Dinwiddie played only three games last season for the Brooklyn Nets. He went down in December with a partial tear of his right anterior cruciate ligament. In 2019-20, he averaged 20.6 points per game for the Nets.

If he can stay healthy, Dinwiddie can give Washington another scorer and playmaker in the backcourt along with Bradley Beal. Dinwiddie's scoring average increased every season he'd been in the league before his 2020-21 campaign was cut short.

Dinwiddie was a second-round draft pick by Detroit in 2014 and, after two seasons with the Pistons, he began to blossom with the Nets. His 2019-20 season not only included a career high in scoring average, but also in minutes per game (31.2) and assists average (6.8).