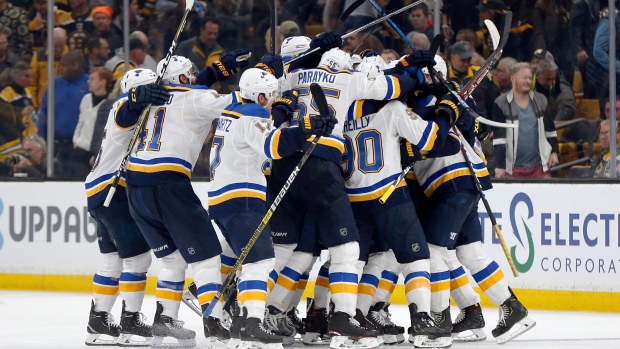 BOSTON — Carl Gunnarsson was in his full equipment when he saddled up next to coach Craig Berube at the urinal before overtime and pulled out his prediction.

It was huge. Gunnarsson had just pinged the post in the final two minutes of regulation, but hadn’t scored a single playoff goal in his first 56 career contests.

“He said he just needed one more shot,” Berube said.

The first-ever intermission urinal conversation etched in Stanley Cup lore set the stage for the first-ever St. Louis Blues win in the Final.

“Yeah, I can’t deny that. That’s where it happened,” Gunnarsson said. “It makes it even more fun, I guess.”

Call it the washroom chat heard ‘round the hockey world. Or the Boston Pee Party. Whatever you want. At this time of year, it’s only weird if it doesn’t work.

Gunnarsson’s aim was perfect. The unassuming Swede played the unlikely hero when he rifled a one-timer just under the crossbar 3:51 into the extra session, earning the Blues a split in this best-of-seven Stanley Cup Final in a 3-2 triumph Wednesday night.

Guess you can say Gunnarsson didn’t have stage fright.

“I liked hearing it,” Berube said of Gunnarsson’s prediction. “He had a hell of a game, I thought, and I’m really happy for him that he ended up getting the game-winner. He hit the post in the third period there and he felt good about himself obviously, which he should have.”

For the resilient Blues, it was redemption after struggling in the series opener. For Gunnarsson, it was payback for the Bruins six years in the making, as a member of that Toronto Maple Leafs team that unraveled in Game 7 in 2013.

It was unquestionably the biggest goal of Gunnarsson’s life.

“No doubt,” he said. “I don’t score too many, but nothing even comes close, so it’s a pretty good feeling right now.”

The series shifts to St. Louis for Game 3 on Saturday night. Gone is the monkey on the Blues’ back of not having won in the Stanley Cup Final. They snapped that 0-for-13 skid, dating back 51 seasons, and derailed the Bruins’ bid for a perfect month of May – handing Boston its first loss since April 30 (8-1).

The Florida Panthers are now the only NHL team winless in the Stanley Cup Final (0-4).

The Blues and Bruins have now needed overtime twice in the Final’s history. Last time, an iconic photograph captured from Bobby Orr’s flying Cup-clinching goal – a memory seared on an entire generation’s mind in Boston.

“Both were scored by No. 4,” Blues legend Bob Plager said, noting Gunnarsson’s number.

This night will be remembered for a different reason. It isn’t abnormal for words to spark a team during an intermission; they just don’t normally come from inside the washroom.

“You don’t hear that story very often,” Blues captain Alex Pietrangelo said. “That’s not a place to have a conversation, but I guess it works. It’s a good story. I didn’t know if he was making it up, because it’s a good story.”

Pietrangelo took Berube’s word for it.

“I mean, I wasn’t in there watching,” Pietrangelo quipped.

The Blues played, well, full of piss and vinegar on Wednesday night. They brought their physical brand of hockey, which left the Bruins with just five defencemen when Oskar Sundqvist knocked Matt Grzelcyk out of the game in the second period. Grzelcyk went to a local hospital for observation after his head bounced off the glass.

Sundqvist offered “no comment” on his hit, which was deemed worthy of a minor penalty for boarding.

This all-square series has all the makings now of a gruelling, heavyweight slugfest that many thought it would be.

“It was a man’s game, it was an in-your-face kind of battle of the wills and I think they got the better of it,” Bruins forward David Backes said. “There were a lot more confrontations, I thought. They carried the play a lot more. Now it’s a best of five. This is probably not going to be the last see-saw effect that goes on in this series.”

The Blues trailed two separate times in Game 2. They stared down a 2-0 series deficit, and talk of a Bruins sweep, and they kept pushing in the third period. They controlled the bulk of the play in the second half of the game, outshooting Boston by a 37-23 margin overall.

“We weren’t happy with Game 1,” Sundqvist said. “I think we lost our game a little bit. We went into this game talking about playing our game. I think we did a pretty good job.”

Rookie sensation Jordan Binnington rebounded from two five-hole goals against to win for the 10th time (10-2) this season following a loss. He did what Hall of Famers Glenn Hall and Jacques Plante could not, be the first netminder to backstop the Blues to a Cup Final win.

St. Louisan Patrick Maroon said Blues fans have been waiting “a long time” for that win. It was 18,858 days to be exact, since the Blues played the first game in franchise history in 1967.

We have ourselves a series now, all thanks to Gunnarsson’s confidence at the urinal.