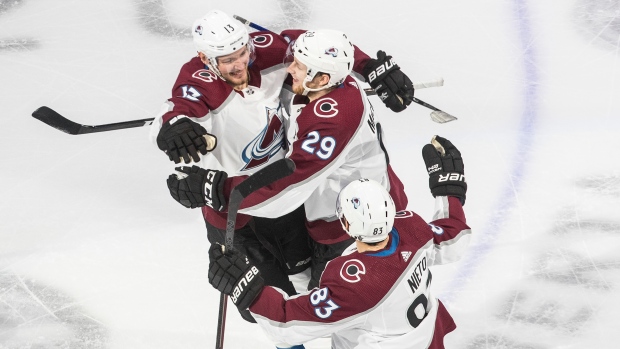 Last April, Wayne Gretzky quietly dialled up Nathan MacKinnon after one of the Colorado Avalanche’s resounding first-round wins because he had to deliver a message.

“They beat Calgary in a playoff game, and I wanted to tell him it was one of the best playoff games I’d ever seen anyone play,” Gretzky said. “He was so dominating, so impressive.”

Imagine being on the receiving end of that call.

One year and one global pandemic later, MacKinnon is now one win away from breathing life into a pursuit of one of Gretzky’s records previously thought to be unbreakable.

Only Mario Lemieux has even sniffed Gretzky’s record of 47 points in a single playoff, set in 1984-85, despite the fact many teams have played more games in the 35 years since. Lemieux averaged 1.91 points per game in 1990-91 when he had 44 points in 23 games.

But with 25 points in 14 games so far – a pace that only The Great One has achieved before him – MacKinnon will be in the conversation if the Avalanche can complete the comeback against the Dallas Stars in Game 7 on Friday afternoon.

“He’s got more than a good chance,” Gretzky said Thursday from his summer home in Idaho. “He has been dominant in every game. It’s almost like he’s picked up 20 guys on his shoulders and said, ‘We’re not going to lose.’”

In MacKinnon, Gretzky sees a triumvirate of greatness.

“He is a cross between [Mario] Lemieux’s hands, [Mark] Messier’s power, Connor [McDavid’s] speed. He is the full package,” Gretzky said. “He is a force.”

MacKinnon, 25, has notched at least one point in each of Colorado’s 14 postseason games. He is four games away from tying Bryan Trottier’s record of 18, which lasted all three rounds of the 1981 playoffs.

At his current tear of 1.79 points per game, MacKinnon would need to play 27 games to topple Gretzky’s record of 47 points.

Breaking a Gretzky record simply does not happen. When he hung up his skates in 1999, Gretzky owned 61 NHL records. He still holds 60 of them some 21 years later.

His playoff points high-water mark was believed to be untouchable because no one has really ever thought about it, let alone threatened it.

The numbers are still jaw-dropping. Gretzky’s 47 points in 18 games in 1985 amounted to an incredible 2.61 points per game, a ratio that won’t ever be topped over a full playoff run. Along the way, he had a staggering five four-point games and one magnificent seven-point night.

Gretzky cracked 40 points in two other playoff runs, most recently in 1992-93 with the Los Angeles Kings, but the closest anyone has come to his 47 in the three-plus decades since was Evgeni Malkin’s 36 points in 24 games in 2008-09.

This year, emerging defencemen Cale Makar and Quinn Hughes have slashed and dashed their way through rookie playoff records.

There has been an opinion that records set in 2020’s unprecedented 24-team playoff should come with an asterisk since they’re being broken with the help of additional qualifying-round or round-robin games.

There’s no taking away anything from this record if MacKinnon can get there, Gretzky said, and that’s not his Canadian humility talking.

“Absolutely not,” Gretzky said. “Look, there is an evolution to the game. Things change, the playoffs change. Jean Beliveau and Gordie Howe only got two rounds. Then Bobby Orr came along and he got three rounds. No one said that my records shouldn’t count because I played four [rounds], more games than Gordie or Beliveau or The Rocket [Maurice Richard]. Their records all would have been a lot higher had they played more games.​

“I wouldn’t think anything of it. I would be the first to shake his hand if he were to break it. He is a terrific kid.”

MacKinnon already has more points (25) in 14 games than any player posted (23) last season in 26 games played by the champion St. Louis Blues.

“He’s doing it against a Dallas team, too, that has played extremely well defensively,” Gretzky said. “I bet the Stars players who are trying to shut him down would tell you to a man that what he’s doing is incredibly impressive.”

Safe to say at this point, though, MacKinnon hasn’t wasted much time thinking about a record still far off in the distance. It wasn’t a twinkle in anyone’s eye with the Avalanche staring down a 3-1 series hole. But it will be living and breathing chase if MacKinnon can collect his first career Game 7 victory.

“I’m sure he’s thinking the same thing I was then, that you want to contribute. He just wants to win, no one is concerned about points,” Gretzky said. “I wish him the best; I think what he’s doing is great for the game. It really is remarkable.”