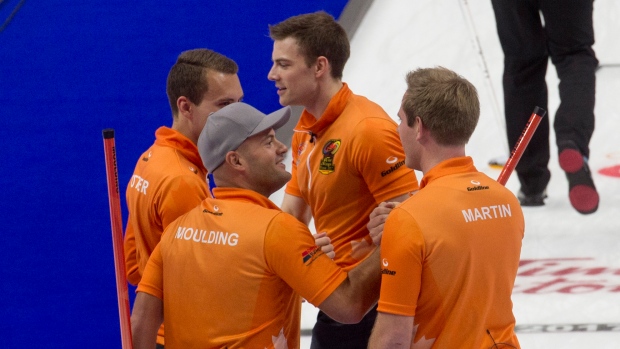 What a great weekend of curling! Congratulations to the winners of the 2019 @AHSCanada #Curling Classic, @TeamBottcher!

Kudos to @PentictonC for putting on an excellent event! pic.twitter.com/ODTw9qSkHs

The Edmonton rink lost just once over the four-day event, beating Jason Gunnlaugson in the quarterfinal, Ross Whyte in the semifinal and Mike McEwen in the final, 4-2.

Team Bottcher are now 18-7 on the season as they enter the Season of Champions opener.

Scotland's Bruce Mouat was also there and lost in the semis to McEwen.

The 2020 Tim Hortons Brier takes place in Team Scott McDonald's hometown of Kingston, Ont., so it's safe to say this season is an important one for the second-year foursome.

Team McDonald haven't played their best this season, posting a 26-25 record through 51 games, going 0-8 over two Grand Slam events against the best rinks in curling.

However, McDonald, third Jonathan Beuk, second Wesley Forget and lead Scott Chadwick put together a strong performance this weekend in Clermont, Quebec to win the Challenge Casino de Charlevoix on the World Curling Tour. The foursome out of the Cataraqui Golf and Country Club went 6-2 at the event with victories over James Grattan, Alek Bedard and Vincent Roberge in the playoffs.

Team McDonald had a breakout campaign in 2018-19, going 6-5 in their first Canadian championship appearance. Getting back to the Brier in their hometown this season would probably be the highlight of their careers to this point.

Kim, 20, who captured the bronze medal at her first world curling championship last season, picked up her first victory on the Grand Slam tour just a few weeks ago at the Tour Challenge Tier 2.

Further East, Charlottetown's Suzanne Birt posted a perfect 7-0 record at the Tim Horton's Spitfire Arms Cashspiel, capping it off with an 8-6 victory over New Brunswick's Sylvie Quillian in the championship tilt.

Undefeated weekend at the Tim Horton’s Spitfire Arms Cashspiel🏆 Thanks to the sponsors and volunteers for a great tournament! pic.twitter.com/BOHchPZXDd

The 38-year-old Birt made her 10th Scotties Tournament of Hearts appearance in Sydney, NS last year, missing the playoffs with a 6-5 record.

At the Black Diamond/High River Cash tournament, Calgary's Jeff Harty made his fourth final on the WCT this season and almost won for the fourth time, but lost to China's Zou Quiang 6-4. Quiang went 2-10 at the world men's curling championship last year.

Mackenzie Zacharias and Sean Grassie won the Sunova Spiel at East St. Paul to close out the week.