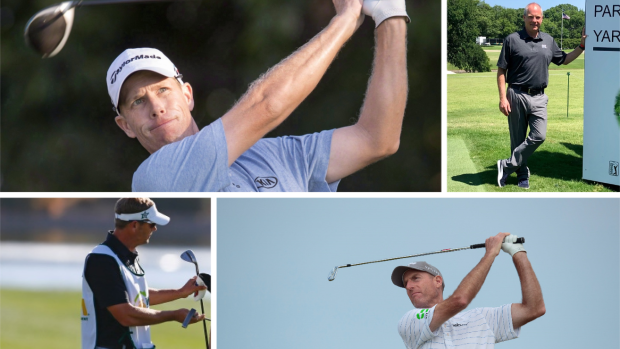 The PGA Tour is set to return next Thursday at the Charles Schwab Challenge in Fort Worth, Texas, and when it does, it will come with a different look.

The first four tournaments will be played without fans and a limited number of people on course.

With so many changes from when the tour stopped play back in March, no one is quite sure exactly what to expect.

Here is a look at the new PGA Tour from a variety of viewpoints.

Jim Furyk has played a lot of golf tournaments since he joined the PGA Tour back in 1994. You’d think he would have seen it all by now.

“I’ve never played a PGA Tour event that didn’t have stands,” said Furyk, who has made 618 career starts. “No stands, no fans, no folks around. It’s going to feel quiet to start with.”

Furyk and his fellow professionals will have a vastly different experience than when they last teed it up for the first round of the Players Championship back in March. The safety protocols put in place by the PGA Tour mean a lot of new procedures – from start to finish.

“I’d probably be lying if I said I wasn’t nervous at all,” he said. “I think when this first started back in March, I was extremely nervous. There was a lot of unknowns about the coronavirus. I think now we’re all feeling a little more comfortable moving around, moving among each other, wearing a mask, keeping your distance. But we’ve also been doing that at home among very familiar settings.

“So to do that now on flights, at the golf course, in a much more crowded locker room. Am I nervous about it? Yeah. I’m a little nervous about it, but I feel comfortable enough that instead of nervous I’d say I’m cautious.”

The tour has worked extensively to try and ensure a safe environment and it will attempt to keep everyone involved with the tournament inside a virtual bubble to prevent any transmission of the coronavirus.

Its plan starts before a player leaves his home, with the tour recommending that golfers undergo a test. To facilitate that, every player was provided with a saliva test kit. There will be another test upon arrival, administered by a mobile service that will deliver results in two to four hours.

Players are also encouraged to stay at designated hotels and not travel out for meals. At the course, places such as the locker room, dining area and driving range are all open but social distancing is expected.

That’s even the case when playing, with golfers and their caddies expected to stay six feet apart. That’s one area where Furyk said he and his looper, Mike ‘Fluff’ Cowan will need to adjust.

“The interaction between the players and caddies will be very interesting,” said Furyk. “We’re in close quarters very often, handing clubs back and forth. The interaction is very close. For Fluff to drop a bag, move away, me move in, grab a club, hit a shot, clean it, put it back in the bag, move away, Fluff move in, it’s going to take a little while to probably adjust to that and get used to the feel of it.”

The look of the golf course itself will be also be unusual, without the tents, stands and other structures found at most stops. Players often use those as targets when hitting shots and perhaps more importantly, they also can help to stop errant shots from travelling too far.

“There’s a lot of greens on the PGA Tour that I’m not actually sure what’s behind them because there’s usually a block of stands there every year when we play them,” said Furyk.

In spite of all the changes, hitting shots, making birdies and dealing with missed putts or a gust of wind that pushes a drive into the rough remain the same. There will still be a winner at the end of 72 holes and there will still be another tournament the next week.

But the first week back will carry a heightened level of importance.

“It will be difficult at first not to make any mistakes,” said Furyk. “We want to provide the right social distance. Folks will be watching on TV. We want it to look and feel like it should.”

Brennan Little is a veteran caddie who is perhaps best known for his time working with Mike Weir when they won the Masters. He now loops for Gary Woodland and helped him to the 2019 U.S. Open.

The two spent last week together in Woodland’s home in Lawrence, Kan., preparing to go back to playing golf.

“The tour is doing everything they can to get back to playing golf and keeping everything safe,” said Little. “I’m glad we’re back playing.”

To prepare for the return, the native of St. Thomas, Ont., was tested for antibodies and also underwent a coronavirus saliva test at his home in Dallas.

He hasn’t yet read the fine print on what will be expected of caddies, saying that protocols have changed over the last month so he’s waiting for a final version. But he knows he’ll be able to handle the pins and bunker rakes, although he’s not quite sure of the actual procedure for wiping them down after use.

The bigger concern, he said, might come from the need to social distance. The interaction between a player and caddie is often vital during a round and, while doing it from six feet apart isn’t impossible, it will take some getting used to.

Little added that keeping the proper distance on tees could prove to be next to impossible if the area is small and crowded, as many are.

“I think you might see some caddies run up and forecaddie on certain holes if there’s no one there,” he predicted.

As for staying inside the bubble the PGA Tour is hoping to establish at each stop, Little will deviate. The first week, he’ll be staying at home with the tournament nearby his residence. After that, he’s lucky enough to be hitching a ride with Woodland on a private plane to the next stop in Hilton Head, S.C., where he’s rented a house with two other caddies.

“I think everyone is a little anxious because we’re not 100 per cent sure of what to expect,” he said. “Until we get on the course, there are a lot of unknowns.”

When Michael Tothe’s phone rang in April he never expected the call would set in motion the most significant overhauls of the tournament he’d been running for the past 12 years.

At the other end of the line was the PGA Tour, asking if he’d be willing to host his tournament, the Charles Schwab Challenge in June. On top of that it would be the opening tournament after the pandemic shut down in March.

“We’re relishing the challenge of being the first PGA Tour event back,” said Tothe, who grew up in Limehouse, Ont., and spent several years working for Golf Canada. “But at the same time, we’ve worked very, very close with the tour to make sure it’s done right.”

The duties of the tournament director usually involve orchestrating the army of 1,600 volunteers and doing everything leading up to the actual start of play. This year has been very, very different.

“This is not what we’d call our normal advance week,” said Tothe. “Typically we’re inspecting structures and finalizing draw parties and anticipating players to round out your field. This year, it’s a lot of PPE discussions, final protocols for parking, and sanitization and disinfecting the property. It’s a little different but I think we’re ready.”

The tournament usually relies on the assistance of about 1,600 volunteers, but this year that will drop to about 300. One of the more difficult jobs faced by Tothe was telling some of those who have worked at the tournament for decades that they will have to sit out this time.

“I think people understand that this is just a different year. It will be historic, we’re rising to the occasion like we did in 2003 when Annika played,” said Tothe referring to the time when Annika Sorenstam teed it up with the men at the Texas tournament.

Tothe knows he is blazing a trail with the first PGA Tour event of the COVID era and, despite all the planning by his team and the PGA Tour, there will be some things that no one has anticipated.

He also knows that the eyes of the sporting world will be on Colonial Country Club. But he remains confident that the tournament will go off as smoothly as possible.

“I won’t say everything we’ve had to do is fun,” said Tothe, “but it’s certainly been educational. It’s been an interesting and wild ride.”

David Hearn has been a regular at the Charles Schwab Challenge, teeing it up in the event eight of the past nine seasons. He’s had three finishes inside the top 21, including a tie for 13th back in 2012.

But this year, with his position on the priority ranking, he’s 15th on the alternate list – a spot so deep that he knows he won’t be playing.

Instead, he’ll head to Jacksonville to play the Korn Ferry Challenge at TPC Sawgrass. That event was created by the PGA Tour to give the golfers on that second-tier circuit a place to play.

“Everybody is excited to get back to playing golf,” said Hearn. “Unfortunately, with the category where I’m in, I have to wait for my start.”

As with the PGA Tour tournaments, players on the Korn Ferry Tour also need to follow the testing protocols. Hearn submitted his test on Wednesday and was prepared to do another one when he arrived at the tournament site.

In a normal year, he and others who came through the Korn Ferry Tour playoff system a year ago would likely get into events such as the one next week.

Tournaments between the majors aren’t always big draws for the top-ranked golfers. But the top five on the world ranking are all entered along with some of the biggest names in the sport.

Hearn will be in the field next week at the RBC Heritage and figures to get six to seven starts before the FedEx Cup playoffs.

“The tour is trying to give everyone a chance to play,” said Hearn. “I think it’s done a pretty good job.”

While keeping his game in shape, Hearn has also been involved in planning the return to golf with his position on the tour’s Player Advisory Council, a 16-member group that advises and consults with the tour’s board of directors. It’s been busy in ensuring everything is in place.

“We’ve been very active,” he said, “but the policy board has been really busy. Those guys have been working hard to make sure everything is in place at PGA Tour events.”

Hearn, like Furyk, Little and Tothe, is ready to get back to playing golf. The first tee time is just days away.