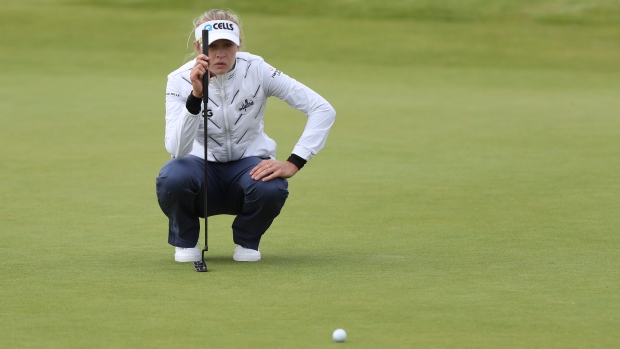 Olympic champion. Major champion. Is there really a difference? Not according to Nelly Korda, who continued her hot play by sharing the first-round lead at the AIG Women’s Open.

“No, I'm just going on like a little girl playing golf, enjoying myself in this cold weather,” said Korda, the gold medal winner at the Tokyo Games a couple of weeks ago.

The No.1-ranked golfer in the world posted a round of 5-under 67 over Carnoustie Golf Links in Scotland to share top spot with Sei Young Kim and Madelene Sagstrom. She finished out her day with birdies on 17 and 18 for a back-nine 34.

Korda has won three of her last five starts, a streak that includes the Olympic gold medal and the KPMG Women’s PGA Championship in June. With that run the attention on the 23-year-old American this week is immense.

“Obviously, there's expectations,” she stated, “but you just try to settle down and keep your head down and go with the flow.”

Korda was out early and played her round in relatively benign conditions. That allowed her to be a bit more aggressive and avoid the fairway bunkers.

“Since it's a calmer day, I think the scores will be a lot better,” Korda said. “So if you can take advantage of the calmer day and then see – you never know at British what kind of weather you're going to get. So if you take advantage of these days and score lower, then I think it's a good stepping stone to the next few days.”

Korda said that during a practice round on Wednesday, she ran into Karen Stupples, the 2004 Open champion and now a broadcaster for Golf Channel who was scouting the course. Stupples shared some advice about links golf in general and Carnoustie specifically that Korda put to good use, along with her own experience playing in Scotland and England.

“Kind of over the years that I've kind of played links golf, I've learned that it's just better to have longer clubs in,” Korda said, “and it's just a different style of golf, like my wedges release like 20 yards because it's so firm.”

Brooke Henderson, the lone Canadian golfer in the field, started her Open Championship with a 1-under 71. Her day was up and down, logging four birdies and three bogeys.

She got off to a good start, playing the opening nine holes in 2-under but stumbled a bit on the back, playing the two par-five holes in one over par.

Henderson’s putting, often her weakness, was solid as she used her putter just 29 times. Conversely, one of her strengths, greens in regulation where she ranks third on the LPGA Tour, was off on Thursday as she found just 11 of 18 putting surfaces.

Henderson’s score is six shots better than her performance last year when she opened with a 77 and leaves her in an 11-way tie for 22nd spot.