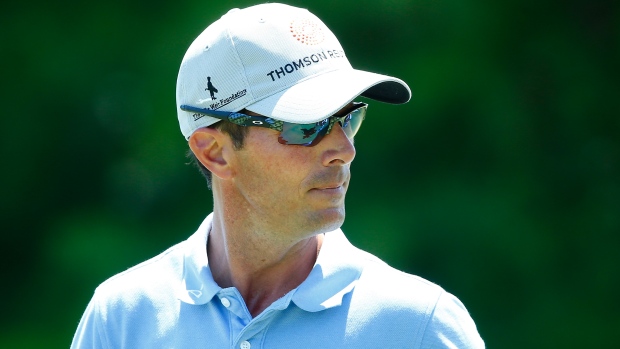 Mike Weir had to withdraw from the RBC Heritage after his first round and that apparently didn’t sit well with another player, who called the Canadian out in a tweet.

Dawie van der Walt, a 33-year-old PGA Tour rookie, who was the second alternate at the 132-player tournament and didn’t get in, said Weir should quit the game.

"Gota (sic) love a guy who gets an invite into a Tour event and then WD after the first round," van der Walt wrote, adding the hashtag, "#hangitupmike."

Perhaps the South African golfer should have waited to find out why Weir pulled out before sending out his message. Weir has been suffering from the flu and was bedridden after his round.

The bug was rampant in the house he was renting last week at the Masters with a number of his friends catching it and it eventually caught up to Weir.

The always classy Weir issued an apology for the early exit.

When contacted on Friday morning, Weir was unaware of the van der Walt tweet or the entire situation. He was still in bed and still not feeling well enough to get up.

After getting some flak for his comment, van der Walt deleted his original tweet and then issued an apology in another 140-word message.

"I should not have said that its [sic] nothing against him it's just when you [sic] hurt and WD and other [sic] could have played."

Weir has struggled over the past two years after undergoing surgery and has either withdrawn or missed the cut in his last 24 starts. He hasn't broken par in any of his 12 rounds so far this year.

But he’s earned his starts through a lengthy PGA Tour career. His spot in the field was a sponsor exemption from RBC, which backs the tournament.

Weir knows he’s struggling and has stated many times that he doesn’t enjoy shooting high scores. But he’s also working hard to change that, under the watchful eye of David Leadbetter. The best way to test out his game is to put it into action.

While his results haven’t been great, that was the same situation he was in before he nearly won the Byron Nelson in 2014, finishing second. A breakthrough could come at any time.

The comments by van der Walt, even if they came from frustration, are way offside. It’s tough not getting starts but every time you tee it up in a tournament, you do so because you’ve earned it. It doesn’t matter what you shoot that day; it matters how you’ve performed in the past to receive your status.

Weir still has some status and still has enough cache with sponsors to be invited into the field.

For van der Walt, there’s one easy way to get into more tournaments: play better.