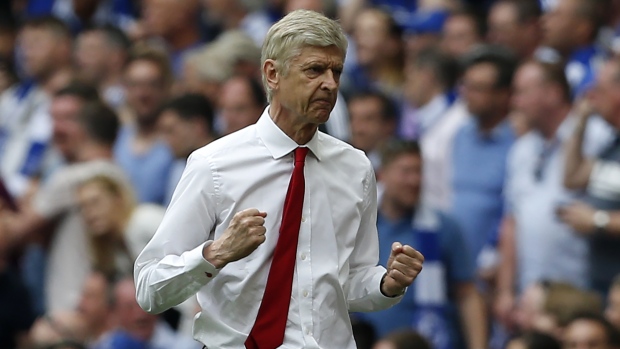 LONDON — Arsene Wenger gathered his Arsenal players to drop a bombshell before training on Friday morning.

After almost 22 years in charge of the north London club, the manager was leaving.

"We didn't see it coming," midfielder Jack Wilshere said. "He had another year left on his contract. Ever since I've known about Arsenal, Arsene has been there. I'm sad."

As the players were informed, so too was the world, via a statement from the 68-year-old Frenchman.

"After careful consideration and following discussions with the club," Wenger said, "I feel it is the right time for me to step down at the end of the season."

Wenger's carefully worded statement, coupled with the reticence of the club's leadership to publicly discuss what precipitated the announcement, pointed to a less than amicable departure amid a backdrop of mounting dissent.

"I don't want to get into all the discussions that went on," chief executive Ivan Gazidis responded, when asked if he wanted Wenger to see out the remaining year on his contract. "The decision is made, I think now it's time for us to honour him."

There is so much to honour Wenger for but largely limited to the first half of his reign.

Before the disillusionment grew among fans as the Premier League title drought persisted, there was so much affection for the manager who revolutionized not just one team but influenced methodology throughout English football.

The highpoint was in 2004 when Wenger became only the second manager to go through an English league unbeaten.

"One of the main reasons we got involved with Arsenal was because of what Arsene has brought to the club on and off the pitch," said American sports tycoon Stan Kroenke, who bought Arsenal in 2011. "His longevity and consistency over such a sustained period at the highest level of the game will never be matched."

But the "Invincibles" season was the third — and last time — Wenger picked up the Premier League trophy. Only twice since then has Arsenal even come second. And after slumping to fifth last season, Arsenal is set to experience a new low under Wenger by finishing sixth next month.

Empty seats in Emirates Stadium at games signalled the growing disenchantment among supporters.

As Wenger's coaching methods and tactics appeared increasingly outdated as a new generation of coaches made their mark, Wenger's power appeared to drain over the last year as executives tasked with overhauling football operations were brought in.

Now the new two-year contract that Wenger signed after winning the FA Cup for a record seventh time last May will not be completed.

"It's been emotional and there will be time to digest it but it's a sad feeling right now," Arsenal captain Per Mertesacker said. "He's the major figure for this club, more than 20 years, it's been so impressive."

Wenger can still depart by delivering one final trophy.

Even though Arsenal is sixth in the Premier League, there can still be a successful conclusion to the season with the team in contention to win the Europa League.

Arsenal's appearance in Europe's second-tier competition is a sign of the recent demise under Wenger. Arsenal became accustomed to qualifying for the Champions League before missing out last season for the first time in two decades.

Winning the Europa League is now Arsenal's only realistic way of Wenger bequeathing his successor a place next season in the more illustrious Champions League.

With Wenger's footprints all over Emirates Stadium, finding a coach to step into the dugout after a dynastic reign is a challenge. Arsenal owner Stan Kroenke only has to look at the problems that have afflicted Manchester United since Alex Ferguson retired in 2013 after more than 26 years in charge. United is on its third manger since Ferguson left after winning a record-extending 20th English title and has not finished higher than fourth.

"I certainly don't believe it heralds a new era of instability at the club," Gazidis said. "You don't find a replacement. You find a new path forward."

While giving nothing away about the succession plan, Gazidis set out the qualities Arsenal is looking for in its next manager.

"Our fans want to see somebody who will continue to play progressive exciting football that gets people interested and excited in the games that we play," Gazidis said.

A popular appointment among Arsenal fans could be Patrick Vieira, who has been gaining coaching experience in Major League Soccer at New York City FC. The midfielder was one of Wenger's first signings in 1996 and featured in all three Premier League title-winning sides.

Wenger took over in October 1996 as Arsenal's first foreign manager on the back of successes at Monaco and a stint in charge of Japanese club Grampus Eight. He was a relative unknown but quickly gained respect for helping to modernize English soccer in the early years of the Premier League, eradicating Arsenal's drinking culture and introducing new sports science methods.

"We have to be open-minded and brave in the decision," Gazidis said. "When Arsene was appointed, I don't think he was on many people's radar. That doesn't mean we have to repeat that but it does mean we have to be bold in the appointment."

Just as Wenger was bold in how he transformed the squad to complete his first full season in charge by lifting the Premier League trophy and FA Cup with Vieira, Nicolas Anelka and Emmanuel Petit in the team.

The arrival of another France 1998 World Cup winner, Thierry Henry, helped to cement Arsenal's revival as a Premier League power, locked in an often bitter tussle with Ferguson's Manchester United for supremacy.

Until, that is, Wenger was shackled by the financial constraints of the move from Highbury into the new Emirates Stadium in 2006. It coincided with the rise of foreign investment in rival clubs, with Russian billionaire Roman Abramovich transforming Chelsea and Abu Dhabi's Sheikh Mansour raising the stakes by lavishing even more cash on players at Manchester City.

The parsimonious financial environment under Kroenke irritated many supporters.

But Arsenal's transfer record has still been broken twice in the last year, to sign strikers Alexandre Lacazette and Pierre-Emerick Aubameyang for around $150 million. And yet the domestic slump has only worsened.

There is still a fear of what comes next at Arsenal. Kroenke, who also owns the NFL's LA Rams, reflected on "one of the most difficult days we have ever had in all our years in sport."