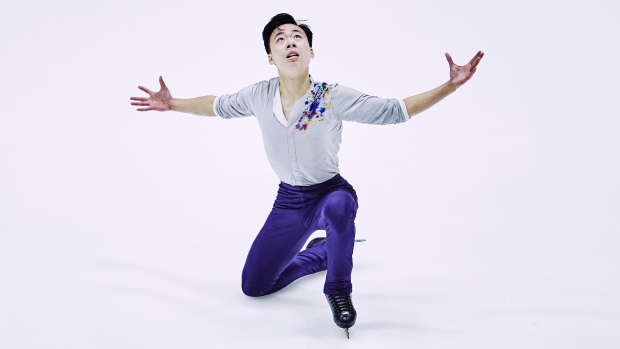 Ilia Malinin of the United States was first with 88.99 points, followed by Chiu, who bettered his personal best with 81.59.

Mihhail Selevko of Estonia was third at 81.26.

"I feel amazing this is a personal best by far and I’m very excited about that,’" the 16-year-old said. "I had really good practices leading up to this event, so I was confident and ready to go.’"

Stephen Gogolev of Toronto, competing at his third world juniors, was in sixth spot and within striking distance of the podium with 78.75. He also landed his three jumps cleanly.

The men's free skate is on Saturday.

Brooke McIntosh of Toronto and Benjamin Mimar of Terrebonne, Que., are also in the medal hunt in pairs, placing fourth in the short program with 58.00.

Karina Safina and Luka Berulava of Georgia led with 67.77, Anastasia Golubeva and Hektor Giotopoulos Moore of Australia were second at 61.72 and Anastasiia Smirnova and Danylo Siianytsia of the U.S. third at 60.38.

Chloe Panetta of Oakville, Ont., and Kieran Thrasher of Amherstburg, Ont., were seventh at 47.90.

Competition continues Friday with the pairs free skate and the rhythm dance.

This report by The Canadian Press was first published April 14, 2022.