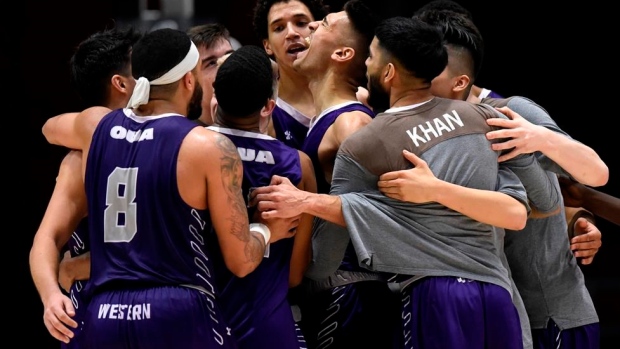 OTTAWA — Calgary Dinos head coach Dan Vanhooren knew exactly what his team needed to do to beat the Carleton Ravens in the U Sports men's basketball championship quarterfinal.

The only problem is that it was almost an unobtainable goal.

"In truth we would have had to play perfect basketball to beat that team," said Vanhooren.

Isiah Osborne scored 21 points as the No. 1 Ravens defeated the Dinos 82-66 on Friday to reach the semifinal stage of the tournament for an 18th straight season.

Brett Layton had a game-high 23 points for No. 8-ranked Calgary.

The game was a re-match of last year's gold-medal game, when Carleton topped the Dinos 84-49.

The Ravens will face the No. 5 Western Mustangs in Saturday's semifinals. Meanwhile, The No. 3 UBC Thunderbirds and No. 2 Dalhousie University Tigers will meet in the other final four showdown.

Grant Audu scored 25 points and Taylor Browne added 16 as the Thunderbirds topped the No. 6 Bishop's Gaiters 103-66 on Friday.

And Keevan Veinot led the charge with a team-high 14 points points as the Tigers downed the No. 7 University of Ottawa Gee-Gees in the final quarterfinal matchup of the day.

"The tempo and the pace of play was the difference."

While the Ravens' bench outscored Calgary 32-14, Carleton also dominated the Dinos from three-point range, hitting nearly 50 per cent of their three-point tries. Calgary was just 4 of 19 (21 per cent) in the same category.

"We know we have a lot of depth and we know we can run on some teams, so we want to go out there and do what we have to do," said Osborne, a fourth-year guard from Windsor.

Only nine points were scored between the two teams early in the opening frame. But the Ravens pulled away in the second quarter, topping the Dinos 24-11.

This is the first year for Carleton head coach Taffe Charles, who was an assistant to Dave Smart for nine seasons before joining the women's program for a dozen more. He led Carleton's women's team to the national title in 2018 after an undefeated season.

Charles said his team got the result it wanted Friday, but there is still work to be done before Carleton takes on the Mustangs in the semis

"We didn't expect it to be easy, although sometimes we make it look easy as a team because we've had success in the past," said Charles. "But winning is not that easy."

The semifinal will be a rematch of the OUA Wilson Cup, which the Ravens won 90-68.

"Some things we need to clean up in terms of recognition and I thought we were a little nervous to start. Some of our fifth-year guys were nervous to start," said Charles. "But hopefully getting this win under our belt will have us play a little bit better tomorrow."

Charles said he and Western coach Brad Campbell are "very good friends" and he knows the Mustangs will come out to try to counteract what happened in their last game.

"We anticipate a very tough match up," said Charles.

A huge second quarter propelled Western to an 86-72 win over the No. 4 Alberta Golden Bears in the opening quarterfinal earlier Friday.

Western outscored Alberta 35-12 in the second quarter, wiping out a 13-point deficit.

Alberta suffered a quarterfinal loss for the fourth consecutive year.

The semifinals are Saturday and the final is Sunday.