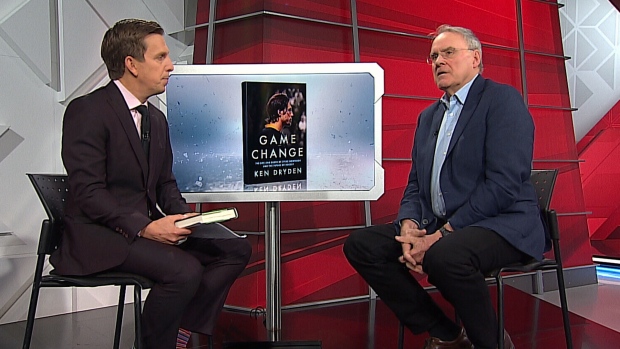 In Feburary of 2015, former NHL player Steve Montador was found dead in his home at age 35. It was later discovered by doctors that he suffered from the effects of chronic traumatic encephalopathy (CTE).

Ken Dryden's new book 'Game Change' tells Montador's story and paints a bigger picture of the ongoing problem of concussions in hockey. TSN's James Duthie sat down with the Hall of Fame goaltender and acclaimed author to discuss his book and how it could help foster real change on how CTE is treated in the game, with highlights from the interview below.

Ken Dryden: I would have decided to write the book, but I knew I wanted to focus on a person and it turned out to be Steve. I didn't focus on Steve, but about the time that I decided to go ahead was when I heard of Steve's death. And so then, I just followed it up from there. But I wanted to write about concussions and I knew the only way was to put in the context of a life.

JD: Why is this book important right now?

KD: I think it's not just right now - I think it's been something that's been important for the last five years at least and will continue to be important. Because I think that head injuries, brain injuries are the most significant issue facing sports.

And it's not just football and it's not just hockey, but it's rugby and lacrosse and lots of other games - soccer - that you don't think about. And for so long, we never connected blows to the head, really, with brain injuries. We didn't in boxing, but boxing seemed to be its own separate category that 'that's what they do' and somehow a blow to the head in football or in hockey isn't the same as a blow in a boxing ring.

And now we're starting to connect all of those things and we're even connecting toward PTSD (Post-Traumatic Stress Disorder) and other things of where a concussion suffered on the battlefield - with an explosion that goes off nearby - again, the brain doesn't distinguish an explosion, a fist, an elbow, or whatever. It's still a blow to the brain.

JD: You have a two-part prescription to minimizing the risk of brain injuries in hockey. One of them is eliminating all hits to the head, which is an idea we've heard before, and the other is eliminating players finishing their checks, which is new. Why do you want finished checks to be eliminated?

KD: Well, I think it's sort of a sub-component, but it's still something that's significant. First of all, it's sort of a ludicrous understanding of how we play. The idea of if you've given up the puck and you no longer have it, somehow you are different that if you never got the puck. If somebody gets hit before they have the puck, then that's interference and everybody knows it's interference - and it's been judged that way forever.

But somehow if you give up the puck and you no longer have it, then it may be just finishing your check. But the problem is that when you give up the puck, you are incredibly vulnerable. At one time the understanding might be, 'well, you've got to get your stick up.'

The game moves too fast for that now - and especially in a passing game. You're giving up the puck like this, you have to lower yourself a little bit. It's not as if you have your head down because if you have your head down, you can't make a pass. But you've got your head lower because you're making a pass, you're reaching this way and not focused on either side and you've got to focus on the puck receiver and you're completely vulnerable. And you're vulnerable to a guy who doesn't deserve the right to hit you because he didn't arrive in time. The ridiculous thing is that he's able to take you out of the play even though he didn't get there in time to make the play. You made the play, but you're equal going out of it.

JD: But you say that in time - it seems so black and white and we know hockey is not black and white - does that mean, is the pass gone for two feet or three feet or a half a second? What is that?

JD: And now it's so embodied in hockey now. 'Finish you check, finish your check.' It's the first thing you hear.

KD: Lots of things are embodied. Except they change. This is a game that's always changed and that's what you hear. But you never even heard that phrase in the 1950s, let alone the 1960s. It didn't exist because the players weren't moving fast enough and didn't get close enough to finish the check. Then it became something - because it’s interference and you've already committed yourself - we'll call it 'finishing your check.' But this is a bit of a distraction - it's a component of when these head hits happen. But it really is a sub-component of the essential question which is about hits to the head.

JD: You make a distinction between controlled speed and uncontrolled speed. So you're referring to this forechecking or attacking player. What's the difference?

KD: Somewhere, whether it was in the '80s or so, teams - especially with defence partners - throw the puck in and crashed after the defencemen. And so one defenceman would get the puck and the other would kind of be his protector. That was the time of obstruction and you do a little bit of hooking and a little bit of holding. And really as a protection mechanism for your defence partner.

So then, what was decided was, 'well, that's really ridiculous...it's almost tackling the guy going in.' And so that isn't fair, so you aren't allowed to control the speed of the guy coming in because it's a penalty. Well all right, that's fair. But why not then say, 'put it in the hands of the checker?' Have him responsible for his own speed. So if you're not going to protect him, you say if you arrive in time, great - good for you, you arrived in time. If you don't think you're going to arrive in time, then you peel off, you slow down, you do something. But you're responsible for your own speed. You don't have the right to decide - after you haven't gotten there - to smack somebody who is essentially defenceless at that point, almost unmoving. You've got a full head of steam going towards you, he's kind of blind to you and plus, he's the one who made the successful play by making the pass and you've been the unsuccessful one, except you get all the benefits.

And when you get down to it, the essential point of it is that the brain doesn't distinguish. Whether it's a hit from an elbow, a stick, a shoulder, intentional, not intentional, the brain is the brain. And it is no less of an impact if it is accidental. And why can't it be the way the NHL is doing it now with at least two rules - and you probably know more than the two. One, you're in the defensive zone and shoot the puck and it goes over the glass. Automatic penalty. You know what happened the first times around. 'Ugh, it's not fair, he didn't intend to, the puck flipped on him, the glass is different in heights in different places.' It's crazy controversies, arguments and the rest of it. A month or so later? Nothing. You go to the box, no big deal, team adapts, the game goes on.

The other (rule) is stick to the face. Stick to the face? Automatic penalty. If you're cut, a double-minor or maybe something more than that. Again, the arguments at first were 'it deflected off the other guy's stick, it went off his arm, he didn't intend to, he was just spinning around.' It's the same question.

The brain doesn't distinguish, the face doesn't distinguish. It's a hit or it isn't. And so why is it always, in terms of an explanation, for the hitter instead of the person being hit? We're at a different stage now. This isn't incidental or insignificant injuries. This is significant stuff.

JD: I think this book is written for anybody who cares about hockey, but it seems to be particularly written for one person and that is Gary Bettman. And you say that directly in the book. In the last couple of chapters you are almost speaking directly to Gary Bettman. Why do you place the onus on him for fixing this?

KD: Because he's really the singular decision maker in hockey. And it's not because of his title as commissioner. That's a part of it. The NHL is the most important hockey league in the world, it's the highest league, and so if you're the commissioner, that gives you a lot of powers. But it's beyond the powers - it's the authority you have and it's something that you gain, that you earn. That others trust you and allow you to go beyond the technical powers that you have.

JD: So you're saying that's behind him - now's the time.

KD: That's right. And he had to earn and learn along the way. And he did. I think the turning point was the 2004 lockout and the 2005 settlement where the salary cap happened. Once the salary cap was in place, that was what his employers - the owners - were really looking for. And the fact that he was able to deliver that, then since that time, he has had that trust that he has earned with them.