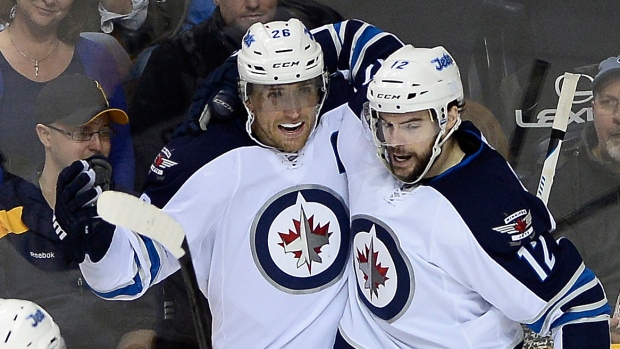 NASHVILLE, Tenn. - Things are going from bad to worse in Nashville.

Blake Wheeler scored the go-ahead goal midway through the second period, and the Winnipeg Jets beat Nashville 3-1 on Saturday night to hand the slumping Predators their sixth straight defeat.

Michael Frolik and Drew Stafford also scored for the Jets, who have won two of three. Winnipeg began the day with a two-point lead for the final playoff spot in the Western Conference.

"We've got to take care of our own business," Wheeler said. "If we start worrying about what the teams around us are doing, we're going to get caught up in the wrong thing. We play our game. We worry about what we do."

Ryan Ellis had the goal for Nashville. Before this skid, the Predators had not lost three in a row all season.

"Obviously, I think a lot of guys in here are (ticked) off and frustrated because I thought we fought hard again tonight, and not getting the results," Nashville captain Shea Weber said. "At the same time we've got to find a way. We're working at this. It's not going to come easy, we know that."

Nashville holds a two-point lead over second-place St. Louis in the Central Division, with the Blues having two games in hand.

Frolik scored the game's first goal at 14:54 of the opening period. From the left side, Andrew Ladd found Frolik unchecked as he skated through the slot, and he beat goalie Pekka Rinne low to the glove side for his 15th of the season.

Frolik's six-game point streak established a career high. He has four goals and two assists in that span.

Ellis tied it 1-all at 10:17 of the second with a shot from the right point through traffic. The goal was his first since Jan. 6. The defenceman missed 21 games with a lower-body injury sustained Jan. 8.

Rinne stopped Tyler Myers' shot from the left side but the rebound kicked to Wheeler, who had an easy tap-in for his 18th of the season.

"That was a tough break," Nashville coach Peter Laviolette said. "It was frustrating to finally get one and get even and give it up that quick."

Michael Hutchinson made 20 saves in his 20th win of the season.

"It's definitely something that's special," he said. "It's pretty cool. I was just happy that I have been able to help the team win games. The team has been playing really well in the games that I have played."

Stafford's empty-net goal in the final minute accounted for the final margin. Wheeler assisted on the play.