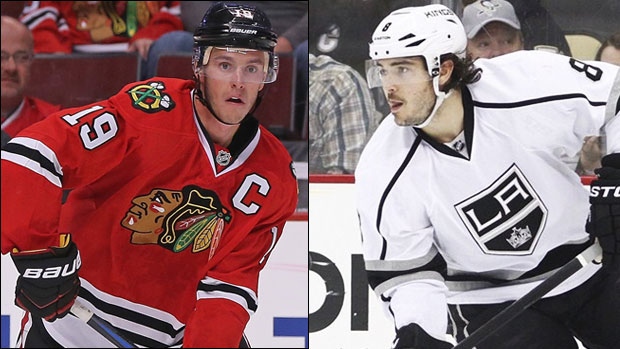 Toews and Doughty , The Canadian Press

With the NHL trade deadline fast approaching, teams are looking for that missing piece that will put them over the top and contribute to a Stanley Cup championship. What if you had your choice of two elite level players and didn't have to worry about giving up any player on the roster or any salary cap implications?

Which superstar would you look to add if given the chance -- Chicago Blackhawks centre Jonathan Toews or Los Angeles Kings defenceman Drew Doughty?

Toews, who was drafted third overall in the 2006 NHL Draft, is considered by many to be one of the best leaders in hockey today. From his shootout heroics at the World Juniors in 2007 to winning two Olympic gold medals to being the captain of two Stanley Cup winners, he shines in the spotlight. When the Blackhawks won the Stanley Cup in 2010 for the first time in almost 50 years, it was Toews who took home the Conn Smythe Trophy as playoff MVP.

Since being selected second overall behind Steven Stamkos in the 2008 Draft, Doughty's stock has risen at an amazing rate. Named to Team Canada for the 2010 Olympics in Vancouver at the age of 20, he was arguably the team's best blueliner. He followed that by helping the Kings win the Stanley Cup in 2012 and 2014 alongside another Olympic gold medal in Sochi.

So we ask, which superstar would you look to add for a long Stanley Cup run -- Jonathan Toews or Drew Doughty?