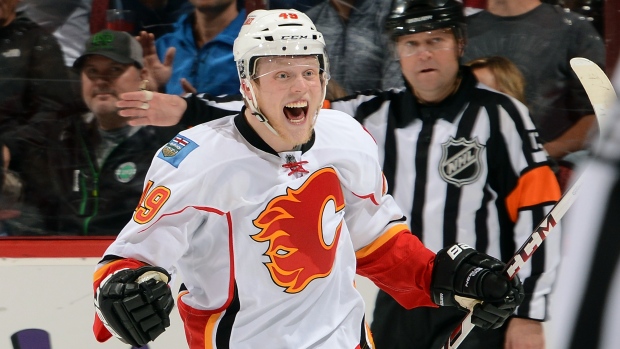 One of the biggest developments in the National Hockey League over the last decade or so has been the increased focus in bottom-six forward competency across all organizations.

It’s borne out of necessity as teams have realized the talent spread at the NHL level is razor thin. While top-end skill will always drive the majority of what happens in the win/loss column, depth players have been given significantly larger and more important roles.

The other important piece of this is, empirically, this stuff matters quite a bit come the postseason. Far too often, top-heavy teams have crashed and burned in the early going when competition improves, while the truly balanced groups – the Chicago Blackhawks under Stan Bowman are one of the best examples - have a better chance of fighting into May and June.

Let’s look at all 30 teams as we near the quarter pole of the regular season. Which teams are top-heavy? And which teams have the requisite depth to not only reach the playoffs, but maybe make a run beyond game 82?

Here’s how each team’s top six and bottom six split (Corsi% at 5-on-5, where forwards are sorted by their average ice-time per game and with at least eight games logged): 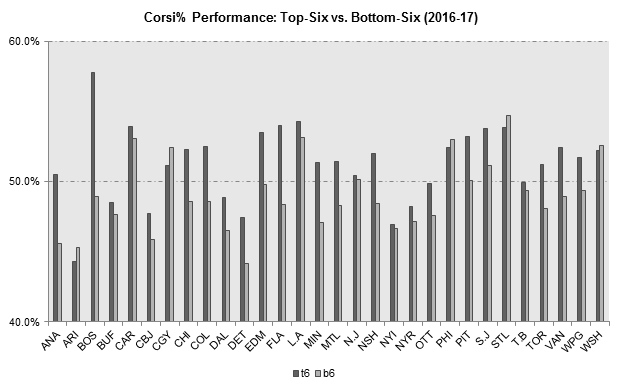 The first order of business is to identify the teams that are winning the shot battle regardless of who is on the ice - usually an encouraging sign. That group includes Calgary, Carolina, Los Angeles, New Jersey, Philadelphia, Pittsburgh, San Jose, St. Louis, and Washington. I think it’s fair to say at least three of these teams, and maybe four, are legitimate Stanley Cup contenders.

Calgary is an interesting inclusion here. The Flames have been chasing the game more than they have been protecting it, so maybe you expect their shot advantages to be marginally inflated. Even then, I’m not sure we are talking about a bad Flames team here - certainly not to the tune of the 7-11-1 record they have posted in the standings. The Flames aren’t getting out-gunned, but rather out-percentaged: Their shooting and save percentages are both in the bottom 10 off the league at 5-on-5, and they have scored a pathetically low number of goals on the power play. So the Flames might have a bunch of problems, but skating with the rest of the league at evens for 48 minutes a night isn’t one of them. If anything, we should be bullish on this team.

One other point on this group: In a year where very few teams are really distinguishing themselves as leaders, the St. Louis Blues make a very good argument. They returned a strong roster from last year and are playing in a suddenly average Central Division. Jaden Schwartz, Vladimir Tarasenko and Robby Fabbri are all guys who can play against elites and perform admirably. But it shouldn’t go unnoticed that Patrik Berglund, Dmitrij Jaskin, Scottie Upshall, and Kyle Brodziak really are having strong seasons too.

The next group is the teams that I’d consider top-heavy (and, if playoffs are on their mind, they should be prioritizing depth player acquisition from now until the trade deadline): Anaheim, Boston, Chicago, Colorado, Edmonton, Florida, Minnesota, Montreal, Nashville, Toronto, Vancouver, and Winnipeg.

This list is intriguing. We have talked for no less than three years about the Bruins’ top-heaviness and how much Patrice Bergeron and company are burdened with - this year, the Corsi% spread between their top six and bottom six is close to nine per cent. I don’t know what the breaking point is for the Bruins, but if I’m GM Don Sweeney and I see a wide-open Eastern Conference, I’m picking up the phone to find out who is out there. Their bottom-six forward group includes names like Riley Nash, Austin Czarnik, Dominic Moore, Jimmy Hayes, Tim Schaller, and Noel Acciari. Maybe this is good enough in the regular season, but are you really beating the toughs in the East or West with this group? I’m skeptical.

On the other side of the ledger, you have to wonder where this season goes for a team like Vancouver. I think there’s some truth to the argument that the Canucks are better than a couple of other teams around the league, and certainly their top-six forwards can still play. But the clock is ticking on the Sedin twins, and I think there’s a good argument to be made that they’re holding the entire operation from falling into a 20-year abyss. I’m not sure what the solution is short-term or long-term, but there’s no way they’re good enough to be competitive in the playoffs this year. Still, I’d be a shade surprised, barring a total fire sale, if they finished 30th.

The last group is the list of teams that are really getting wacked regardless of who is on the ice. For the sake of isolating on the bottom of the pool, I’ll focus on the ones at the bottom of the drain. The big three here are Arizona, Columbus, and Detroit (though the Islanders aren’t far off).

Arizona has been dangerously bad this year - they’re getting out-chanced at record differentials and even if they weren’t supposed to be competitive this season, one would’ve thought they’d show some improvement year-over-year. Columbus and Detroit, on the other hand, were supposed to be good this year. They are not.

The Blue Jackets are basically getting by on an all-world power play. If and when that dries up - they’re shooting over 22 per cent right now there – this team’s going to be exposed. Detroit is very similar, just without the power-play greatness, and that’s why they are one point ahead of dead-last in the Atlantic Division. If you are betting on two teams fading as the season progresses, the bet is here.