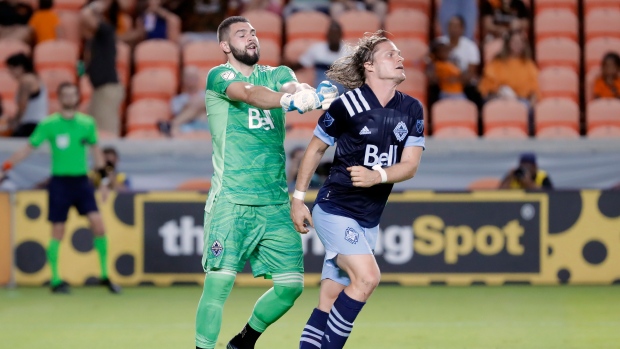 He doesn't have any crunching tackles planned for when the San Jose Earthquakes come to town on Saturday, however. Instead, he's plotting a verbal attack.

“I like to go in the mind of my opponents, love a little trash talk," Jungwirth said with a smile. "The guys know me, know how I am, but let’s see how they respond.”

San Jose traded the 32-year-old German defender to Vancouver on Aug. 6, and he didn't come off the bench in a scoreless draw between the two sides on Aug. 13.

"He's the (greatest of all time) in MLS," Jungwirth said. "I really hope that he's starting (Saturday) because I love the guy. We are good friends and he's a great guy and personality. … If we face each other, with all due respect to the legend, I'll get my job done."

After beating FC Dallas 1-0 at home last Saturday, the club travelled to Texas and battled the Houston Dynamo to a scoreless draw on Wednesday. Vancouver now sits just three points out of a playoff spot with eight games to go in the regular season.

After two long flights and a tough game in a hot and humid environment, putting up another solid performance on Saturday is no small ask.

“We have to be completely honest — we didn’t have time to prepare the game. So that’s pure and simple," said Vanni Sartini, the 'Caps interim coach.

He noted that San Jose (8-10-9) is in a similar situation, though, having fallen 3-1 to the Seattle Sounders on Wednesday.

"The simple thing is to keep it simple for the player, not make too much changes and keep the same structure that we’re working on in last games and trying to get better consistently, basically," Sartini said.

The Earthquakes sit just a point behind the 'Caps in the Western Conference, making Saturday's matchup a crucial one in the playoff race.

Vancouver has eight games to go in the regular season and is one of six teams separated by six points or fewer in the middle of the standings.

"It's super tight," goalkeeper Maxime Crépeau said of the table.

“We need to top the week off properly at home to make the playoffs. It’s not a secret, the locker room knows that we need to win games at home and get some points on the road. So (Saturday's) like a final to us and we’ll address it this way.”

The 27-year-old Canadian 'keeper has put up a pair of clutch performances for Vancouver over the past week, saving an injury-time penalty to preserve the win over Dallas and making four saves to record his fifth clean sheet of the season in Houston just days later.

He's been named to the MLS Team of the Week two weeks in a row, but Crépeau remains focused on the task ahead — securing a playoff position.

“These are the games that I train for and I want to help the team get at this level in time, which is playoffs," he said. "That’s the only thing that matters."

CANADA CALLING: Crépeau and Cavallini have both been called up to the Canadian national team for a series of World Cup qualification games later this month. Team Canada also called up Vancouver defender Derek Cornelius, who's currently on loan to the Greek Super League side Panetolikos FC.

HOME FIELD ADVANTAGE: The Whitecaps have been solid at B.C. Place this season, posting a 4-1-0 home record since returning to Vancouver in August. The 'Caps started the season based out of Sandy, Utah, due to border restrictions and went 3-3-2 as the "home" side at Rio Tinto Stadium.

This report by The Canadian Press was first published Oct. 1, 2021.