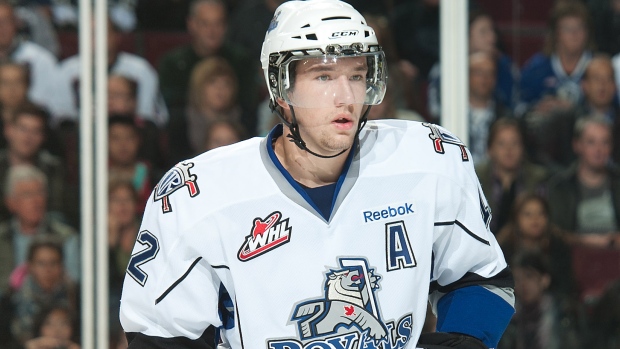 Tim Traber had a hunch the NHL wouldn't be calling him.

So last season, during his fifth and final year in the Western Hockey League, Traber phoned the league's office in Calgary to discuss his education scholarship.

Five years earlier, as a 15-year-old who was drafted by the Chilliwack Bruins, Traber had been drawn to the WHL partly because the league made him a promise: for every year he played in the WHL, the league would pay for a year's tuition if he later went on to university or college.

Last year, the beefy winger, then playing with the Vancouver Giants, wanted to know his options. He had offers to play the 2014-15 season in Switzerland or in the American Hockey League. But when a WHL official told Traber that he could play professionally for a year in Switzerland without jeopardizing his scholarship, Traber decided to go to Europe.

"If you play one or two seasons and then for whatever reason, if you have family issues or injuries or personal matters, you decide to step away from the game, it's important to have an education, especially in this day's world," Traber said.

But something changed between last year and last month.

When Traber's agent Derek McCann contacted the WHL, McCann was told that Traber had voided his scholarship by signing with an elite-level Swiss team.

"It's not fair that guys go and take a shot at something they love, and it gets taken away, that's not right," said Traber, now 22.

He said he has the marks to get into university.

"I wasn't a scientist, but I did well in school," he said. "I was on the honour roll. The WHL does a good job with this. There were tutor courses, study sessions, I stayed after school. They pushed us and made sure we got good marks. If you didn't go to class, you wouldn't play."

Traber is in a bind. He's a fan of the WHL after five seasons and says he and other players have benefitted from the league's perks.

"Some teams make big money, that's true," he said. "But they also spend big money on players. We don't have to pay for our gear. We only had to pay for our car, insurance and cellphone. We got fed for free. Even when we stopped on the road, we got our meals free."

But even so, he says it's not right for any league to use a scholarship to lure a player and then later change the terms so they can't use it.

Traber said he isn't certain whether he would leave Switzerland and return to Canada for school next year if he was eligible to use the scholarship. He says he simply wanted to know his options.

"We have not heard from (Traber)," a WHL spokesperson said. "We are in the process of contacting the player and we will clarify with him the status of his scholarship."

The spokesperson said it's the league's policy to discuss terms of educational packages only with a player or their parent, not a player agent.

Traber's agent McCann said in February he contacted the WHL and spoke with league official Paul Kurceba. McCann said Kucerba told him that Traber's scholarship had been forfeited because Traber was playing in a "tier one European pro league."

But McCann said the WHL's policy doesn't make sense. The WHL allows players in the American Hockey League to maintain their educational scholarship. That's noteworthy because salaries in the AHL can exceed those in Switzerland.

McCann said Traber is making the equivalent of about $50,000 a season in Switzerland. Many players in the AHL make at least $70,000.

"I don't think the WHL is informed about what the salaries are in Europe," McCann said. "The WHL says the players are making enough money to pay for school after they finish playing. There's no chance. These guys are not breaking the bank at 21 or 22."

Traber's situation has come to light after several of hockey's most prominent player agents — whose companies collectively represent about one-third of active NHLers — said the Canadian Hockey League needs to relax its policy of voiding educational scholarships 18 months after a player's over-age season in major-junior hockey.

As things now stand, a player who finishes CHL hockey at age 19 and plays in the ECHL or for a professional team in Europe for three years is ineligible — at age 22 — to take advantage of his scholarship.

Consider that Statistics Canada says the median age of a university student in Canada was 22.5 in 2007, the most recent year for which statistics are available.

"The education package is purposely constructed to be as restrictive as possible," said Octagon Hockey's Allan Walsh. "The CHL's dirty little secret is they don't want players using these packages. They're severely limiting the number of former players that can make use of their earned school money."

Two other agents, CAA's Pat Brisson and Newport's Don Meehan, also told TSN the CHL should be open to changing its policy to encourage more former players to go to college or university.

Brisson and Walsh say players should be allowed to use their full education scholarships at least three years after playing junior. Meehan said the issue deserves more discussion.

CHL Commissioner David Branch has been resolute in defence of Canada's premier major junior hockey leagues. Branch says that when the CHL established its rules for the education scholarship, including its limited window, he consulted with the parents of CHL players.

Those parents, Branch said, support the league's stance of voiding post-secondary scholarships for players 18 months after their overage season in major junior hockey.