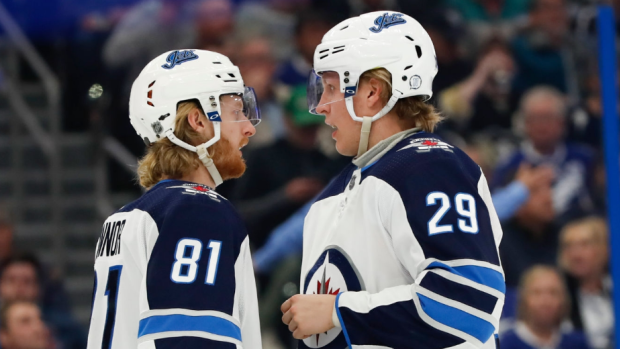 On the eve of training camp, the Jets are feeling a pressure unique to Winnipeg alone in this seemingly league-wide battle to ink restricted free agents.

Put aside the fact that a quick start is critical in the murderous Central Division, where five teams are legitimate Stanley Cup contenders.

Put aside the fact that the Jets may already be facing an uphill climb, having lost half of its backend (Jacob Trouba, Tyler Myers and Ben Chiarot) to free agency this summer.

And put aside, for one second, that RFAs Patrik Laine and Kyle Connor have accounted for 139 goals - more than a quarter of the team’s production - over the past two seasons.

Time is of the essence for each and every team to get their prized RFA talent on the ice as quickly as possible.

But it is even more critical for the Jets, the only team with two high-priced RFAs unsigned.

Because for each day that passes after Opening Night on Oct. 2 with Connor and Laine unsigned, the Jets will be facing a salary cap squeeze that might force the exodus of another roster player.

There is a quirk in the NHL’s salary cap that when an RFA signs after the regular season has begun, the cap hit for the first year of their deal is higher than the remaining years of the deal.

The more days that pass (there are 186 in the NHL this season), the higher that first-year salary cap hit will be.

The best and most recent example is William Nylander and the Toronto Maple Leafs last season.

Nylander withheld services until the Dec. 1 deadline for RFAs to sign. He inked a six-year, $45 million deal, which in a normal circumstance would carry a $7.5 million salary cap hit per year.

Since Nylander signed 60 days into the season, his salary cap hit for last year was $10.277 million, while the remaining five years were at a lesser charge of $6.962 million.

This quirk actually helped the Maple Leafs, because they weren’t feeling the cap crunch last season, but saving $500,000 on the cap hit this year and beyond - when they knew they would be with Auston Matthews and Mitch Marner needing new deals - would be beneficial.

The opposite is true for the Winnipeg Jets.

According to CapFriendly.com, the Jets have approximately $15.4 million in salary cap space with 20 players currently on their roster.

Given the calculations involved, that seemingly fine cushion could evaporate in an instant depending on when Connor and Laine sign. That’s the case even if Laine, the true wild card in these RFA negotiations, agrees to a two-year bridge deal, as most believe he ultimately will with Winnipeg.

That’s because it isn’t difficult to calculate Connor’s cap hit creeping up north of $10 million if he misses a significant chunk of the schedule.

Let’s say for illustration purposes that Connor is willing to sign a six-year, $48 million deal. That is $500,000 more Nylander per season, which seems to be a fair benchmark.

Assuming that Connor will take the bulk of his Year 1 money in signing bonus to limit lost cash, here are the calculations with the help of CapFriendly.com:

As you can see, letting even a full month of the season drag on - bringing that initial cap hit up to the $9.5 million neighbourhood - calls into question the Jets’ ability to sign both Connor and Laine without having to juggle the rest of their lineup. Laine at $6 million per season on a two-year deal - which feels optimistic from a Jets perspective - would have the Jets at the very top of the cap.

Either way, the Jets figure to be paying wingers a league-high $36 million or more this season - or more than 45 per cent of the overall salary cap, according to data on CapFriendly.com. The Vegas Golden Knights currently spend the most on wingers at $35.8 million, the Jets are currently at $22.3 million without Connor or Laine.

Speaking of Vegas, a betting man would gamble on these two scenarios:

1) That Laine signs before Connor, because Connor is the more complete and consistent player, and he won’t be signing for less than Laine.

2) That even if the numbers are painful, GM Kevin Cheveldayoff will swallow hard and not let too much time drag on, for the reasons illustrated above.