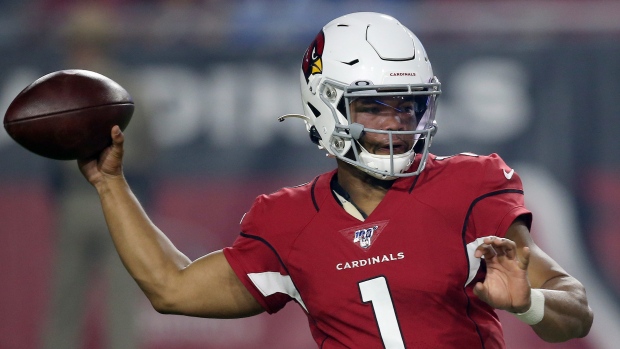 The Arizona Cardinals will host the Oakland Raiders in preseason action on Thursday with pre-game coverage starting at 7pm et/4pm pt on TSN2.

The Raiders and the Cardinals combined for just seven wins in 2018, but not many teams had more exciting off-seasons.

The Raiders traded for the outspoken yet extremely talented Antonio Brown, the most productive wide receiver in the league over the last eight years. Former Super Bowl-winning coach and Monday Night Football colour analyst Jon Gruden is enough to entertain on his own, but Brown and Gruden together is can't-miss TV.

There are a lot of backs vying for the top spot in Oakland's backfield after Marshawn Lynch decided to retire. Rookie Josh Jacobs out of Alabama is probably the guy the Raiders would like to be their feature back after the team spent a first-round pick on him.

Veteran back Doug Martin will get his share of preseason carries as well, but at 30 years old Martin's best ball may be behind him. Jalen Richard will see a good amount of playing time catching the ball out of the backfield. Richard tied for a team-high 68 receptions last season. DeAndre Washington, James Butler and Mack Brown will all need to make a strong impression if they want a job come September.

For the 16th year in a row Larry Fitzgerald will be starting for the Arizona Cardinals. Beyond Fitz, the Cards have had a revolving door at the wide receiver position for years. Sophomore Christian Kirk showed some promise in his first year, but it remains to be seen how he will perform with a new quarterback and a coach in a vastly different offensive scheme.

Rookies KeeSean Johnson, Andy Isabella and Hakeem Butler could make it difficult for former first-round pick Kevin White to make the final roster after Arizona spent a 2019 pick on each of them. Pharoh Cooper is also fighting for a roster spot, with his ability in the return game possibly giving him an advantage over some other receivers in camp.

In case you forgot, this time last year Khalil Mack was a Raider. Oakland traded him to Chicago on Sept. 1 and suffered the consequences. The Raiders had just 13 sacks in 2018 and addressed the position heavily in the 2019 draft. The team selected three pass rushers, including, to the surprise of many, defensive end Clelin Ferrell fourth overall. Oakland clearly expects that Ferrell will develop into an elite pass-rusher, but there are plenty of questions outside the first rounder.

Rookie Maxx Crosby has earned some camp praise but it's hard to imagine him as more than a rotational player. Josh Mauro and Benson Mayowa bring some NFL experience to this group but they're far from household names. Mo Hurst is the most proven of the bunch at getting to the quarterback, but the team still needs a consistent edge rusher to step up.

Antonio Brown, WR, Raiders
Brown forced his way out of Pittsburgh this off-season and made a lot of noise in the process. However, Brown has the ability to silence his critics by putting together another dominant season with quarterback Derek Carr.

Richie Incognito, Guard, Raiders
Incognito has a colourful past, to say the least, but his talent can't be denied. He has made the Pro Bowl three of the last four seasons he's played in the NFL, but sat out the entire 2018 season unsigned.

Kevin White WR, Cardinals
This may be the last shot at an NFL career for White. As the seventh-overall pick in 2015, White has had a number of injury setbacks throughout his career. With the Cardinals’ bevy of pass-catchers, White will likely need to have an outstanding camp and preseason to earn a roster spot.

Terrell Suggs OLB, Cardinals
T-Sizzle, the seven-time Pro Bowler and 2011 NFL Defensive Player of the Year, left the Ravens for the desert this off-season. Suggs has the most experience by far on the Cards defensive line, and at the age of 36 is still very useful as a rotational player.