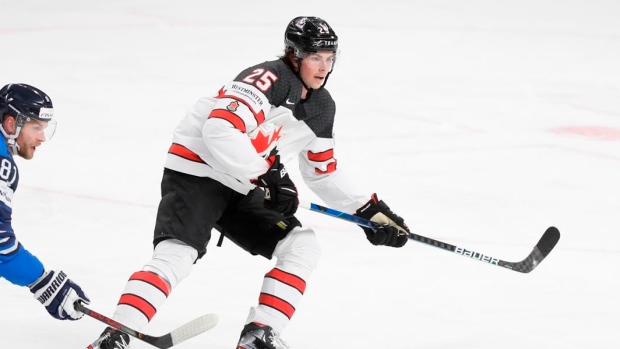 BEIJING — Canada always views itself as the favourite at international hockey tournaments — even if that feeling isn't shared outside the locker room's four walls.

No matter the stage, there's a certain swagger brought by any team wearing the red Maple Leaf.

Four years after the NHL skipped the Winter Olympics in Pyeongchang for financial reasons, Canadian fans were expecting to finally see the likes of Sidney Crosby, Connor McDavid and Nathan MacKinnon share the same ice under the sporting world's biggest microscope.

COVID-19, of course, had other ideas.

The NHL withdrew from the 2022 Games in Beijing six weeks ago due to a string of coronavirus outbreaks that led to the postponement of close to 100 contests, forcing most countries participating in men's hockey to drastically pivot.

And while there remains lingering disappointment hockey's brightest stars won't be on the ground in China, the event set to open Feb. 9 should still provide plenty of entertainment with a wide-open field at the top of the ledger.

"It's a tough tournament to win," said Canadian captain Eric Staal, who struck gold in 2010 when the NHL participated in its fourth of five Olympics. "You need everything to line up correctly.

"We've got great players, but we need to perform as a team and we need to have everybody on board."

Canada, however, is on its third coach after Tampa Bay Lightning bench boss Jon Cooper left the post when the NHL nixed its plans before Claude Julien suffered fractured ribs during a recent team-building exercise at the country's training camp in Switzerland.

That leaves Jeremy Colliton, formerly of the Chicago Blackhawks until he was fired in November, to take the reins.

"The goal and the expectation is to win gold," added 20-year-old defenceman Owen Power, the No. 1 pick by the Buffalo Sabres at the 2021 NHL draft.

"Every time team Canada suits up for hockey, that's the expectation."

The hockey power, however, doesn't sit atop the heap heading into tournament.

With that in mind, The Canadian Press takes a look at the 12 teams — old rivals and new faces in Denmark and China — that will compete for gold in Beijing:

Playing under the "ROC" acronym for a second straight Olympics as part of the punishment for failing to turn over accurate data from the Moscow drug-testing laboratory, Russia will be looking to repeat with a roster made up of players from its domestic league.

The Russians have talent up front in the form of KHL leading scorer Vladim Shipachev, plus ex-NHLers like Artem Anisimov and Nikita Gusev, while Slava Voynov and Nikita Nesterov will be expected to anchor the blue line.

The Russians won gold in 2018 thanks in large part to Ilya Kovalchuk, who's the general manager in 2022, and Pavel Datsyuk.

The Finns seem to always punch above their weight at international tournaments. This edition is led by former NHLers Valteri Filpulla, Leo Komorov, Markus Granlund and Teemu Hartikainen up front.

Finland won Olympic bronze in 2014 when the NHL last participated, while its best-ever showings were silver-medal performances in both 1988 and 2006.

Canada's is bringing a roster mix of youth and experience led by Staal and number of other ex-NHLers, including David Desharnais, Jason Demers, Daniel Winnik and Adam Cracknell.

But the most exciting aspects of the group comes from the other end of the age spectrum with youngsters Power, forward Mason McTavish and goaltender Devon Levi.

Canada, which was upset by Germany in the semifinals four years ago, but rebounded to secure bronze, hasn't won gold at a non-NHL Olympics since 1952.

Marcus Kruger and Anton Lander are among the names North American hockey fans might recognize from their time in the NHL.

The Swedes, who should be in the mix for a medal, also have Jacob de al Rose as they look to get back on the podium after taking silver in 2014.

The Czechs have big question marks in goal heading into the tournament with all three netminders having recently tested positive for COVID-19.

Former NHLer David Krejci is the most notable name on a roster that will be looking to secure a medal for the first time since grabbing bronze in 2006.

The Swiss boast a lineup that includes ex-NHLers Denis Malgin, Gaetan Haas and Sven Andrighetto up front, while the back end features Raphael Diaz, Mirco Muller and Yannick Weber.

Reto Berra, meanwhile, should get the call in goal for a country looking for its first men's hockey medal since 1948.

Instead of a top line that might have featured Auston Matthews and Patrick Kane, the U.S. is sending a roster of mostly college players from the NCAA.

The Danes are making their first appearance at the men's Olympic tournament with ex-NHLers Frans Nielsen, Mikkel Boedker, Nicklas Jensen and Peter Regin.

Slovakia, Germany, Latvia and hosts China fill out the remaining spots in the three-group field.

The Slovaks' roster includes Marko Dano and Martin Marincin, while the Germans, who won that surprising silver in 2018, have Tobias Rieder, Tom Kuhnhackle, Dominik Kahun and Korbinian Holzer.

Latvia's squad boasts the likes of Kaspars Daugavins and Ronald Kenins, while Kristers Gudlevskis, who made 55 saves in a 2-1 loss to Canada's NHLers back in 2014, will be back in his country's crease.

China, meanwhile, will be making its first-ever appearance at a Games with a roster sporting 11 Canadians, seven Americans, one Russian and six homegrown players.

Vancouver's Brandon Yip, one of the athletes with Chinese heritage on the team, has the longest NHL resume, while Jake Chelios — son of Hall of Fame defenceman Chris Chelios — is also on the team after playing the last three seasons with Beijing-based Kunlun Red Star, which joined the KHL in 2016 in hopes of increasing the country's talent pool.

"It's starting to feel real," Yip said. "We're just really excited to finally be here and be on this stage and make China proud."

This report by The Canadian Press was first published Feb. 2, 2022.