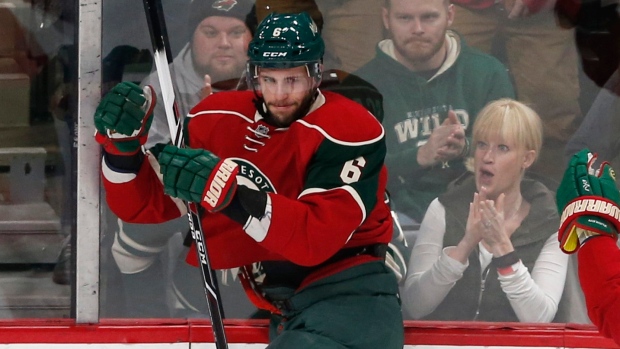 As they've done so often during this franchise-record run, the Wild simply kept to their plan and got the bounce they needed.

Haula scored midway through the third period to help Minnesota hold off the New York Islanders 6-4 on for its 12th victory in a row.

After New York's Brock Nelson scored twice in 42 seconds early in the third to tie it, Haula put the Wild ahead 5-4 with his sixth goal when Nino Niederreiter's shot deflected off Haula's leg.

Marco Scandella, Chris Stewart, Jared Spurgeon, Jordan Schroeder and Mikael Granlund also scored for Minnesota, which had a franchise-record three goals in 80 seconds in the second period. The Wild's Devan Dubnyk allowed more than three goals for the first time this season but made 23 saves to win his 10th straight start.

The win sets up a showdown on New Year's Eve against the Columbus Blue Jackets, who have won 14 straight games. It's the first time in NHL history two teams have had concurrent win streaks of at least 12 games, according to the Elias Sports Bureau.

"They have a will to win," Minnesota coach Bruce Boudreau said of his team. "I mean, they like this. I'm sure Columbus is the same way. They like winning. Columbus gets down early and they say, 'OK, we've got to pick it up a notch,' and they're able to do it."

Jason Chimera and Nick Leddy also scored for the Islanders, who had won three in a row. Jean-Francois Berube stopped 10 of 11 shots for New York after taking over for Jaroslav Halak.

"It's a tough loss," Islanders coach Jack Capuano said. "It's too bad. Jaro wasn't sharp at all. Some soft goals to start, and then we had to battle our way back in. I thought we did a good job against a really good team, a team that shoots pucks from all angles, especially their D. I thought Berube went in there and gave us a chance."

After Leddy had given the Islanders a 2-1 lead in the second, Stewart scored from beside the goal, banking it off Halak's shoulder into the net. Spurgeon scored 35 seconds later and Schroeder capped the franchise's fastest stretch of three goals with his second of the season.

"Frustrating, a lot of different swings there," Nelson said. "Some positives but it's tough when they're not going your way."

Minnesota's outburst ended Halak's night. He was pulled early for the second time this season after giving up four goals on 24 shots. Berube played just his fourth game of the season and second in relief.

NOTES: The Wild reassigned F Kurtis Gabriel to Iowa of the AHL prior to the game. Gabriel has one assist and 24 penalty minutes in 10 games with Minnesota this season. ... G Thomas Greiss was scratched for the second time since Nov. 18 as the Islanders have rostered three goaltenders all season. ... New York's 6-3 win earlier this season is the only time Minnesota has lost a game by more than one goal. ... The Wild have outscored teams 44-22 in the second period this season.

Islanders: A four-game road trip continues in Winnipeg on Saturday.

Wild: The two hottest teams in the NHL meet as Minnesota hosts the Columbus on Saturday.