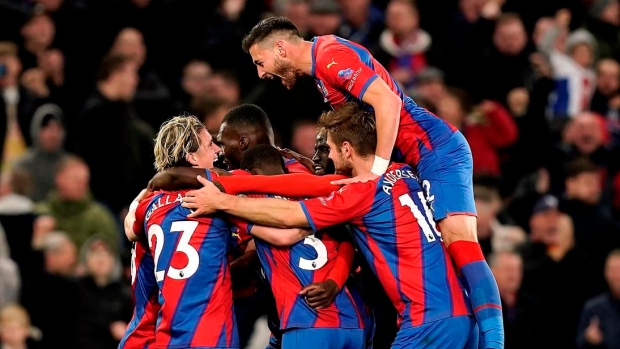 Wilfried Zaha and Conor Gallagher scored in a 2-0 victory over Wolverhampton on Saturday to follow up on a triumph last weekend at Manchester City.

It's now six games unbeaten for the south London club.

James McArthur slipped Zaha through on goal with a perfectly weighted pass and the Ivory Coast forward slotted into the corner from a tight angle in the 61st minute.

Assistant referee Peter Kirkup immediately raised his flag to signal for offside but VAR overruled the decision, giving Zaha a fourth goal of the campaign and sparking a second round of celebrations at Selhurst Park.

The home fans were lauding technology again not long after when Wolves were denied a penalty after Joel Ward brought down Rayan Ait-Nouri. Referee Graham Scott awarded a penalty but another VAR check saw a free kick given instead, with the incident taking place on the edge of the area.

Palace doubled its lead in the 78th. Gallagher was again first to a loose ball. After being given too much time by the defense, the Chelsea loanee saw his effort deflect off Conor Coady to leave goalkeeper José Sá wrong-footed.

Palace goalkeeper Vicente Guaita had to save Joao Moutinho’s low free kick to ensure another clean sheet as the team moved up to ninth in the standings. Wolves is a point and a place better off.