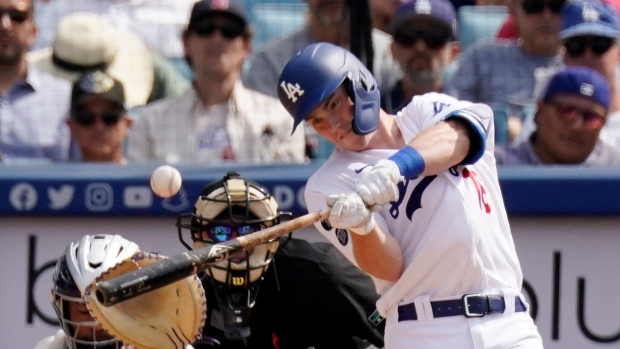 Will Smith , The Canadian Press

LOS ANGELES (AP) — Will Smith hit a go-ahead home run in the eighth inning and the Los Angeles Dodgers beat the Colorado Rockies 3-2 on Sunday.

Chris Taylor added a pair of home runs and the short-handed Dodgers won consecutive games against the Rockies with just four total runs.

Smith broke a tie with the home run to left center with one out in the eighth against right-hander Carlos Estevez (2-2). It was his 14th home run of the season and his third in the seven-game homestand.

“He’s a 20-, 25-homer guy for me with a high on-base (percentage) and he’s doing exactly what we’re hoping for,” Dodgers manager Dave Roberts said about Smith. “Honestly, we’ve plugged him in the middle of the order for the last year and a half and he’s only going to get better.”

Taylor hit home runs in the first and fifth innings to give him 16 on the season. Phil Bickford (1-1) worked a scoreless inning for the victory, and Joe Kelly pitched a scoreless ninth inning for his first save.

Elias Diaz hit a home run for the Rockies and Trevor Story had an RBI single. The Rockies did win the series opener Friday but have an MLB-low 10 road victories this season.

“I think we’ve been in a lot of games with the Dodgers,” Rockies acting manager Mike Redmond said. “I mean, if you look at the overall scores, there’s a lot of games that are pretty close. Unfortunately, the big hits are coming from them, not from us.”

Taylor led off the game for the Dodgers with a home run, but a makeshift lineup was held in check from there. Josiah Gray gave up two runs on three hits over four innings in his first career start with four walks and six strikeouts.

The Dodgers did not have either Mookie Betts (hip) or Cody Bellinger (hamstring) in the starting lineup. Corey Seager (hand) has been out since May.

The Rockies got things started early against Josiah Gray with a leadoff walk from Raimel Tapia, who stole second base. Tapia scored on Story’s two-out single to center field.

The Rockies took the lead in the second inning when Diaz hit his ninth home run of the season. It was his second home run of the series, with five of his nine homers coming in July. The Dodgers tied it again in the fifth on Taylor’s home run.

“The first (Taylor home run), I wouldn’t say it was a terrible pitch, it probably wasn’t the best location, but it was sharp enough,” Jon Gray said. “The second one really took me by surprise. I tried to sneak a curveball in there but he’s really seeing the ball well right now.”

The Dodgers fielded a starting lineup that included Billy McKinney in right field, Matt Beaty at first base, Zach McKinstry at second and Luke Raley in left. The foursome went 0 for 13 with two walks from McKinney.

“I’m not playing any different,” Taylor said when asked if he made an effort to lead the way amid a new-look lineup. “I think we have trust in all nine guys no matter who is in there. I’m always trying to play my best, it doesn’t matter what the lineup is. I’m just trying to get on base and it’s all extra when you’re able to drive a ball for slug.”

Rockies: INF Ryan McMahon did not start because of “lower-leg stiffness," according to Redmond, and was only available in an emergency situation. ... RHP Robert Stephenson, on the injured list with upper back tightness, threw in the outfield and could be in line for a bullpen session when the team moves on to Anaheim to face the Los Angeles Angels this week.

Dodgers: After a long wait for him to recover from right him inflammation, Betts finally was placed on the 10-day injured list retroactive to Thursday, while RHP Jimmy Nelson (left lumbar strain) was activated from the IL. Betts last started a game July 17 and last appeared in a game Monday.

The Rockies will and send right-hander German Marquez (8-7, 3.50 ERA) to the mound Monday against the Angels in the opener of a three-game road series. After an off day Monday, the Dodgers will have left-hander Julio Urias (12-3, 3.63) on the mound Tuesday at San Francisco to face a Giants team that won three of four at Dodger Stadium last week.