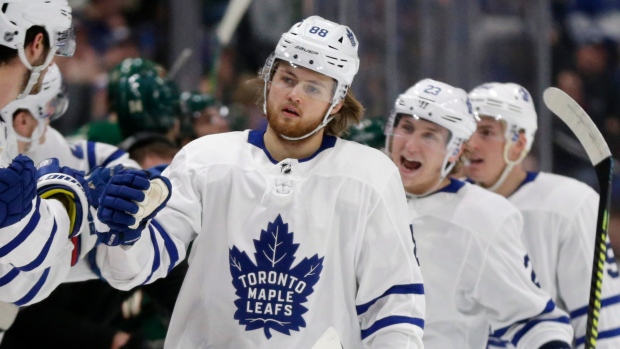 ST. LOUIS — Rewind the tape to last April, the day the Toronto Maple Leafs cleaned out their lockers, and listen to William Nylander explain his lost season.

Regrets? He had a few, unable to recover from missing the first two months of the season when he took his high-profile contract dispute to the last possible minute.

“I wish I would have been here from the beginning,” Nylander said on April 25.

Those regrets fuelled a summer of trade speculation with his $45 million contract - and more importantly, a summer that set Nylander up for success.

He changed his jersey number. He changed the way he prepared. He’s now changed his perception around the NHL - as one of Sheldon Keefe’s most reliable forwards in a season riddled with injuries.

Nylander, 23, has 16 more points and 15 more goals in 49 games at the All-Star break than he had in 54 total games last season for the Leafs.

For all of that, Nylander was voted the Comeback Player of the Year in the Professional Hockey Writers Association’s Midseason Awards, which were released on Thursday.

To do it in such a high-profile setting in Toronto is what helped Nylander edge out other Comeback candidates in a season full of them, including Connor McDavid overcoming a serious knee injury, James Neal’s renaissance in Edmonton and Anthony Duclair finding a home in Ottawa.

“We are very proud of William for being able to put last season in the rear-view mirror and use it to be able to properly motivate his off-season work and performance,” Leafs GM Kyle Dubas said via email on Thursday.

“William came into the season in excellent condition and determined to find his best on the ice. The way he prepared himself in the off-season has fuelled his performance in the first half of the season.”

Nylander’s 22 goals have matched his career-high and he’s on pace to set a new career best in points. He is also playing two and a half more minutes per night than last season and well above his career average ice time.

“This is what we paid for,” Dubas said on Dec. 2, nearly one year to the day since Nylander signed his deal.

In the past, Nylander was perceived as a perimeter player, but not anymore. He has scored the second-most inner-slot goals in the NHL this season as Keefe has moved him to the net-front spot on the power play.

That’s been the key to his comeback season.

“This year he's really gotten to that area. He’s been a menace around the net,” Mitch Marner said last weekend. “He’s not missing his opportunities when he gets around there, which is huge for him and our team.”

Hart Trophy - to the player adjudged to be most valuable to his team.

Norris Trophy - to the defenceman who demonstrates the greatest all-round ability in the position.

Selke Trophy - to the forward who best excels in the defensive aspects of the game.

Calder Trophy - to the player selected as the most proficient in his first year of competition.

Lady Byng Trophy - to the player adjudged to have exhibited the best type of sportsmanship and gentlemanly conduct combined with a high standard of playing ability.

Vezina Trophy - to the goaltender adjudged to be the best at his position.

Jack Adams Award - to the coach adjudged to have contributed the most to his team's success.

Jim Gregory GM of the Year Award - to the General Manager adjusted to have contributed most to his team's success.

Rod Langway Award - to the defenceman who best excels in the defensive aspect of the game.

Comeback Player of the Year Award - to the player who returned to a previous high level of performance that was interrupted by subpar play, long-term injury or major illness.