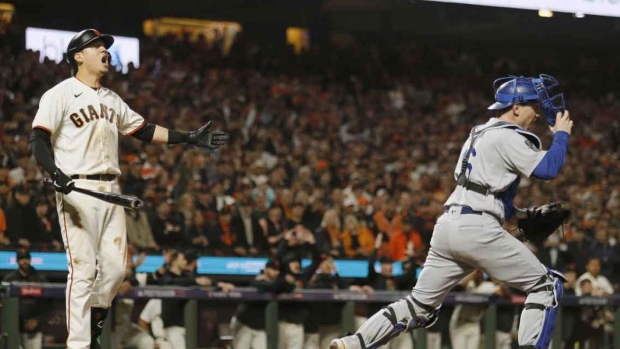 San Francisco Giants infielder Wilmer Flores thought he didn’t go around. Manager Gabe Kapler agreed. The broadcast crew, most fans at Oracle Park, and a large section of social media did, too.

So, what did first base umpire Gabe Morales and crew chief Ted Barrett think of Thursday’s check-swing call that ended the Giants’ 107-win season and sent the Los Angeles Dodgers to the NLCS?

“Check swings are one of the hardest calls we have. I don’t have the benefit of multiple camera angles when I’m watching it live. When it happened live, I thought he went, so that’s why I called it a swing,” Morales said of what he thought after reviewing the replay via the San Francisco Chronicle.

“The plate umpire appealed the check swing to me. I thought he went, so I called it a swing,” he said.

Barrett confirmed Morales had seen a replay of the swing after the game but didn't want to elaborate on if he was wrong or not.

But the Giants were a little less diplomatic about the ruling.

“It looked like he didn’t go. I mean, that was my take on it,” Giants manager Gabe Kapler said. “I just think it’s just a disappointing way to end.”

With the Giants down to their last out and trailing 2-1 in the ninth inning with a runner on first, Flores appeared to check his swing on a slider down and out of the strike zone from Max Scherzer, who was in the close things out for L.A. Home plate umpire Doug Eddings appealed to first base for help and Morales ruled Flores went around.

According to the MLB rule book, intent is the only thing an umpire measures to determine whether a batter went around or not. The play is not reviewable as it is considered by rule to be a judgement call.

“We talk about it a lot in our meetings because it is one of most difficult calls. We try to get all on the same page as a staff that we’re all trying to call the same thing. But by the rule book, it just says did he offer at the pitch? So, there’s some ambiguity there, but we do our best to try to be consistent, so the players know what’s a swing and what’s not,” Barrett said.

With their victory Thursday night, the Dodgers will head to Atlanta to begin the National League Championship Series Sunday against the Braves.