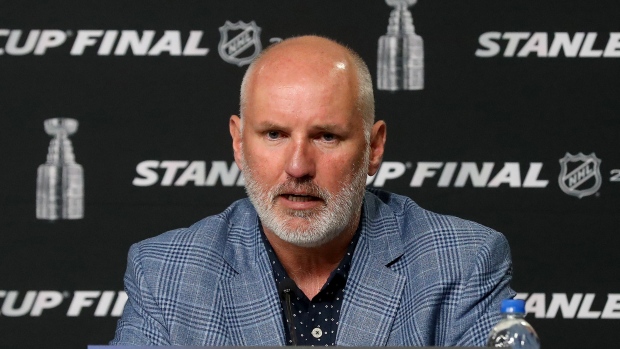 ST. LOUIS — Forty nine years ago, Neil Armstrong was on the ice as a linesman the last time the St. Louis Blues skated in the Stanley Cup Final in 1970 - against these same Boston Bruins.

Forty nine years later, Neil’s son Doug is on the precipice of going where no man has gone before - in bringing the Stanley Cup to St. Louis as general manager.

Somewhere in Sarnia, Ont., 86-year-old Neil will be watching on Sunday night.

“Hopefully,” Doug Armstrong said, as this series started. “I think he is.”

It has been a difficult few years for the elder Armstrong, one of 16 on-ice officials inducted into the Hockey Hall of Fame. The man nicknamed “Ironman” for not missing a single assignment from 1957 through 1978 - a span of 1,744 straight regular season games - is suffering from Parkinson’s disease and dementia.

Their next conversation could be one to remember, as the Armstrongs may soon be mentioned in the same breath as the Sheros, the Fletchers, and the Bowmans - legendary father-son duos who have won the Stanley Cup as front office members.

Neil was recognized for his work as a linesman, but he spent two decades as a full-time amateur scout for the Montréal Canadiens - where he helped the Habs to Stanley Cups in 1986 and 1993.

Doug won his first Stanley Cup as an assistant to Bob Gainey in Dallas in 1999. Nearly 20 years to the day later, he can do it again after steering St. Louis’ ship through turbulent waters.

“Really, what going through a run like this has shown is how many people around the game talk about him,” Doug said of his father. “It makes you feel fortunate to have someone like that who was held in such high regard around the league.”

That is what makes the Stanley Cup so special. The party on the ice is really just a bigger celebration for all of the people who helped make that moment possible.

The tears of joy shared between T.J. Oshie and his father, Tim, last year in Las Vegas was an indelible Stanley Cup moment.

It was the perfect reminder that yes, the Blues are playing for each other, and playing for a Cup-starved city - but they are also playing for family in Game 6 on Sunday night.

It’s about Patrick Maroon, and his incredible journey, signing a one-year deal with the hometown Blues last summer so he could be around his 10-year-old son Anthony for a full season for the first time in his NHL career. Anthony cried tears of joy after Pat’s series-winning OT goal in Game 7 against Dallas.

It’s about Ryan O’Reilly and Brayden Schenn playing for their brothers - Cal O’Reilly and Luke Schenn - who were teammates in the NHL on the Sabres and Flyers, but never got the chance to win together.

“I think about it a lot,” Ryan O’Reilly said. “I wouldn’t be here in this league if it wasn’t for my family, my parents, my brother, the stuff they did throughout the years to get me to this place. I can never repay them. They’ve done so much above and beyond.”

Ryan said it was a special to play with Cal on the Sabres because “growing up we were only trying to kill each other.”

“He’s about four and a half years older than me, and that’s how I think I really learned how to play the game,” Ryan said. “I always tagged along with him and he let me play with his buddies. I think I learned to play that defensive game and hold my own because of him.”

Both Cal and Luke will be in Enterprise Center. Luke had travel trouble on Saturday and was ready to drive 13 hours from a Washington airport to St. Louis to make Game 6. He wouldn’t miss it.

“He’s my biggest fan,” Brayden said. “I think as a player, you realize how hard it is to win, so to have a family member, and your best buddy here, that’s amazing.”

It’s about Michael Del Zotto, the Blues’ extra defenceman, whose parents Steve and Lee haven’t missed a game in the Stanley Cup Final - even though their son hasn’t skated in a single playoff game this spring.

It’s about Del Zotto’s childhood teammate from the Toronto Blues, captain Alex Pietrangelo, and how he’s played for the memory of his son, Gabriel, whom they lost in 2017 due to complications of the pregnancy. Pietrangelo can share this win with the triplets him and his wife, Jayne, welcomed in 2018.

“There hasn’t been a single day that I have not thought about Gabriel or shed a tear for him,” Pietrangelo wrote last year. “For me, hockey has always been much more than a game. It’s a place you can go to forget about everything in the world for a while, where there’s no pain and no problems. Everything is just pure fun.”

It’s about Jaden Schwartz honouring the memory of his sister, Mandi, whom he lost to cancer at the age of 22 back in 2011. Schwartz has carried Mandi with him every step of the way in the Stanley Cup Final.

“What a scene that would be if Jaden gets to hold up the Cup,” his father Rick Schwartz said. “I would love to see his reaction, knowing that Mandi is there with him. That would be priceless.”

It is within reach now - for the Blues, for St. Louis, for all of them.