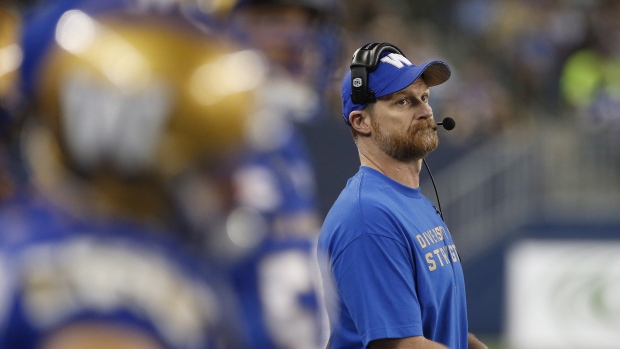 The CFL team's president and CEO was flanked by fellow Canadians Kyle Walters and Mike O'Shea at a press conference Friday to talk about new deals for the pair.

O'Shea received a three-year contract to remain the head coach of the newly minted Grey Cup champions through the 2022 season.

Walters had one year left on his contract as the club's general manager and got a three-year extension through 2023.

The three former CFL players have been with the Bombers since late 2013 and got the nickname "Canadian Mafia" after the 2018 West Division final against the Calgary Stampeders.

"There's pride for sure," Miller said of the moniker, which is on T-shirts, including one with the trio's faces.

"I love it, the fact that we're all Canadian, and it's great."

Stampeders head coach Dave Dickenson was caught on camera and microphone during last year's division final using an expletive before the word Canadian while he was questioning why some calls were being made in front of O'Shea.

O'Shea, 49, said Friday he's a "very proud Canadian" and looks forward to continuing the unique working relationship he's had with Miller and Walters the past six seasons.

O'Shea is the longest-tenured head coach in the league, while Walters, 46, is the second-longest tenured GM behind Calgary's John Hufnagel.

"We have a group up here that's wired similarly," O'Shea said. "We have the same passion.

"We have different roles, but we respect each other roles and we've figured out a way to keep evolving in how we work together to make sure that we can add the 's' onto this championship."

The Bombers finished third in the West Division this year with an 11-7 record.

They upset Calgary in the West semifinal and Saskatchewan in the West final before ending a 28-year Grey Cup title drought with a 33-12 win over Hamilton on Nov. 24 in Calgary.

"It got worked out, I thought, in a very timely manner," O'Shea said of his new contract. "I think both sides are pretty happy."

He's now working on who'll replace LaPolice — Bombers quarterbacks coach Buck Pierce is a favoured choice — and which other coaches will remain on staff.

"As our leadership has shown, continuity is very important," O'Shea said, only adding he'll decide if interviews for an offensive co-ordinator are part of the process.

Once the coaching staff is in place, the focus will shift to signing quarterbacks.

All three of the team's pivots who started games last season – Matt Nichols, Chris Streveler and Zach Collaros – are pending free agents. Under a new rule, teams can only dress two QBs next season.

"There's all sorts of things with the free agents to prioritize who we want back," Walters said.

"But obviously, the quarterback position is where it all starts. That's going to be the price point that you have to put in and see the domino effects and how that affects the rest of the roster."

Winnipeg picked up Collaros at the Oct. 9 trade deadline from Toronto as insurance behind Streveler after Nichols had season-ending shoulder surgery in late September following an injury the month before. Collaros and Streveler were a one-two attack throughout the playoffs.

Could the Bombers keep all three pivots?

"It's highly unlikely that you're going to be able to afford all quarterbacks (because) of the reality of the situation," Walters said.

"But until you get the pecking order in place and the No. 1 that you want under contract and see that price point, and go accordingly from there."

Note to readers: This is a corrected story. A previous version incorrectly had Walters as the CFL's longest-tenured GM.