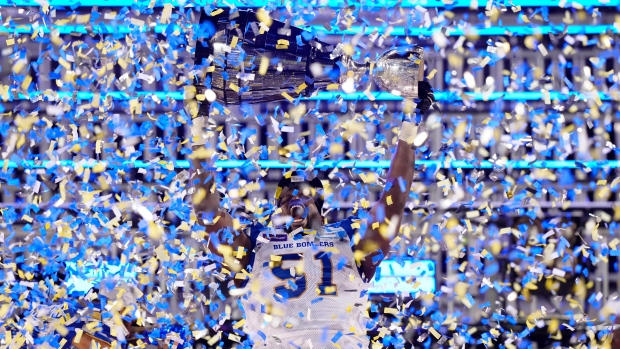 WINNIPEG — Cheers bellowed from the stands as the Winnipeg Blue Bombers coaches and players loaded into the back of pickup trucks and paraded the Grey Cup in front of fans during a long-awaited back-to-back championship celebration on their home field.

The Bombers fans were ecstatic after the team clinched a tight win Sunday over the Hamilton Tiger-Cats.

It kept the trophy and the glory in Winnipeg for fans who’d been wanting the team to defend their 2019 championship for nearly two years after the COVID-19 pandemic delayed the Canadian Football League’s regular season.

“This looks a little different than a parade,” Bombers’ head coach Mike O'Shea told the crowd of a few thousands at IG Field on Wednesday evening.

“This is phenomenal. We really appreciate all of you.”

When the Bombers’ ended a 30-year drought and finally brought the Grey Cup home in 2019 a massive parade filled the streets of downtown Winnipeg.

With the COVID-19 pandemic and the Omicron variant spreading, the team decided to hold a different kind of celebration following the 2021 victory.

Fully vaccinated fans came to the team’s stadium to watch highlights from Sunday’s championship game and see their team finally let loose after a hard-fought season.

“Epic. Fantastic,” Sean Kavitch said excitedly about the team’s season and clutch of a second cup.

“With the true blue, it’s fantastic.”

The snow and cold didn’t stop the players from ripping off their uniforms, riding bare-chested in the back of trucks on the field and holding the Grey Cup high in the air as roars echoed from the stadium seats above.

Kathy Dowd said she’s been a Bombers fan her entire life and she remembers too clearly all the years of losses. Winning two CFL titles in a row — even with a pandemic-related pause — is cause for celebration, she added.

“Having them win and everything going their way is awesome,” Dowd said, wearing a Bombers’ mask and bundled in blue winter gear.

Neil Ferguson said even though there isn’t a parade, as long as the fans are together it’s always a great time.

“To be back here again this year, it’s a real special feeling that we aren’t taking for granted,” Ferguson said.

It was a sentiment not lost on the team either.

Before celebrations took off Wednesday evening, quarterback Zach Collaros said the pause in play and challenges of a pandemic had been difficult.

It made bringing back the Grey Cup to their fans even more meaningful, he added.

“It’s going to be really special for us to be out there with our fans.”

This report by The Canadian Press was first published Dec. 15, 2021.