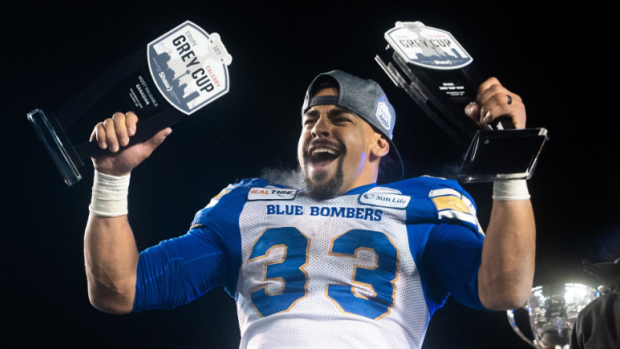 The Winnipeg Blue Bombers have re-signed Canadian running back and Grey Cup MVP Andrew Harris to a one-year extension. Harris was set to become a free agent in February.

Glad to see Harris back for another year. 1 year deal for 170k. Arguably the best 🇨🇦 RB in @CFL history. @CFLonTSN @TSN_Sports https://t.co/9Tp1o5je7t

The Blue Bombers also agreed to a restructured deal for the 2021 season with linebacker Adam Bighill on Friday.

...and if there is an off-season GM of the year award, it goes to Kyle Walters. @andrewharris33, @Bighill44, @Stmn_Willie_Bmn, @Demski9, @ZCollaros7, Bryant, Hardrick, Gray, Antigha, Jeffcoat, Thomas, Maston all back under manageable deals. Most of the heavy lifting already done!

Harris returns to the Blue Bombers for a fifth season, after joining the team as a free agent in 2016 after seven years with the BC Lions.

In 2019, he won the Grey Cup, and named the game’s MVP and Most Valuable Canadian. Harris finished the 2019 season with 1,380 yards and four touchdowns along the ground, adding another 70 receptions for 529 yards and four more touchdowns.