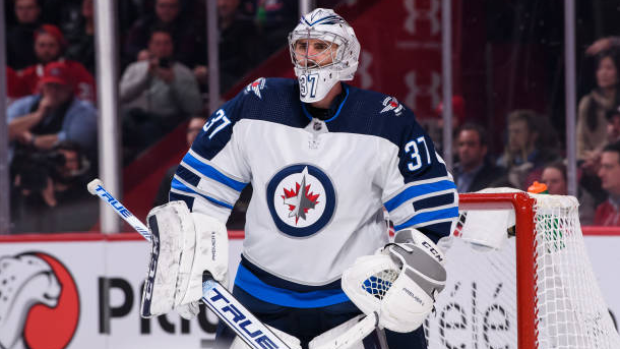 Connor Hellebuyck let out a laugh when he was asked about his selection to TSN’s all-time Winnipeg Jets roster, which spanned three iterations of the franchise.

He was picked alongside WHA netminder Joe Daley, who played for his hometown Jets during three AVCO Cup title runs from 1972 through 1979.

“Man, I was so honoured when I saw that,” Hellebuyck said. “It’s really cool because I am friends with Joe. His son sent me that photo right away and just to be mentioned with him – it brought me a lot of joy because he is such a great guy.”

For Hellebuyck, a spot on TSN’s all-time team was another important reminder of the impact he’s made in Winnipeg in five short years.

That ability to stop and take stock of what he’s already accomplished is one reason Hellebuyck believes he’s bounced back from an average campaign in 2018-19 to reclaim his place among the league’s elite goaltenders as the Vezina Trophy frontrunner this season.

The mental turnaround, Hellebuyck says, happened in Feb. 2019 while sitting by the pool in Mexico.

“The bye week last season changed everything for me,” Hellebuyck said. “It allowed me to get away from the game. I was so hard on myself. A lot of negative things were getting to me. I think it was one of those things where I was trying so hard, and wanted it so bad, that I had to let some of that go.

“I’ve always been confident. But I realized that I know how to play, I know how to do this, and I have thick skin now. Not a lot of negatives bother me. That bye week got me to a whole new mental game that I didn’t know existed.”

That mental focus, coupled with the fact that Hellebuyck said he found his “trigger” in the off-season and figured out how to better manage the NHL’s slimmer chest protector, allowed him to turn in an impressive regular season.

It’s no secret: Winnipeg wouldn’t have come within a whisper of the Stanley Cup playoffs without Hellebuyck and his .922 save percentage. That he did it with a makeshift defence in front of him – the Jets lost Dustin Byfuglien, Jacob Trouba, Tyler Myers and Ben Chiarot and replaced them with five budget blueliners each making less than a million dollars – made this campaign even more impressive than the breakout 2017-18 run that earned him a Vezina runner-up and got the Jets to the West final.

Back in his native Michigan for the NHL’s pause during the pandemic, Hellebuyck hasn't seen any shots in nine weeks, but he is working on his "goalie muscles."

“A lot of core work,” Hellebuyck said. “Some crazy stuff.”

There are stability drills, using Swiss exercise balls, where Hellebuyck works on balancing. He has targeted his abs, hip flexors and glutes specifically – sometimes all in the same drill while balancing on one knee.

“That foundation will allow me to come back quickly and be ahead of the game with injury prevention,” Hellebuyck said.

He has also been fishing, playing golf, and watching a lot of games from the Jets’ three-round playoff run in 2018. Hellebuyck already sees an improved goaltender from the one on tape.

“I can look back and see how much better I am now,” Hellebuyck said. “I’ve been keying in on the reads I was making, how much stronger I look in the net now, how much more I can do. I’ve always been able to project confidence, but I feel more much confidence now.”

So while Hellebuyck will undoubtedly be feeling the pressure if the Jets make it into the NHL’s 20- or 24-team playoff format, he feels he will be able to get back to form fast.

“I’ve learned that the most important thing is your mind,” Hellebuyck said. “The difference when we return will be who can mentally get that edge. I’ve been building my mental game and I’d like to think that’s my strength. I think that's why I can pick up where I left off.”