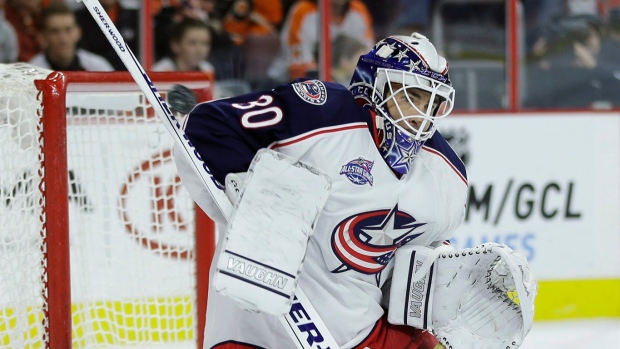 PHILADELPHIA - For the Columbus Blue Jackets, it just felt good to finally get a win.

James Wisniewski and Nick Foligno both scored two goals, and Columbus snapped a nine-game losing streak with a 4-3 victory over the Philadelphia Flyers on Friday night.

"It's a big confidence booster to see us be able to do it," Foligno said. "In games before, we allowed it to slip away."

Ryan Johansen had four assists for the Blue Jackets, who tallied three goals on the power play and avoided a team record for consecutive losses.

"We've done a great job staying positive in this locker room, understanding we're all in this together," Wisniewski said.

Jakub Voracek, Claude Giroux and Michael Del Zotto scored for Philadelphia, which had won three straight but hadn't played in nearly a week.

"We couldn't keep up," Flyers coach Craig Berube said. "We looked like a step behind."

Foligno broke a 2-2 tie with 10:13 left in the second period when he waited out goalie Steve Mason, while moving laterally in front, and deposited a wrist shot into a wide-open net.

Wisniewski put Columbus up 4-2 just under four minutes later when he scored during a 5-on-3 advantage, beating Mason on the stick side after a rebound in front.

Del Zotto brought Philadelphia within 4-3 just over a minute into the final period when he ripped a slap shot from the left circle that zoomed past Curtis McElhinney's glove side, clanked off the post and went in.

But Columbus held on.

"It's a really good feeling," Blue Jackets coach Todd Richards said. "But it's just one step in the right direction. We did a lot of good things tonight. Some areas we have to get better at. Enjoy it right now."

"We did a lot of good things," Foligno said. "(McElhinney) was great and our power play was clicking. Every line was playing really well for us. That's the way we play and the way we have our success."

The game marked the return of Columbus forward Scott Hartnell, who had 326 points in seven seasons as a popular member of the Flyers before being traded during the off-season for R.J. Umberger and a draft pick.

Hartnell received hearty applause during pregame introductions and got a standing ovation midway through the first period when the Flyers played a video tribute of his highlights in a Philadelphia uniform, ending with "Thank You Scott Hartnell."

"It was really a cool minute there," Hartnell said. "It felt like forever. It really touched me that they would do that for me."

Columbus scored two of the three goals in the first period, all of which came on the power play.

Wisniewski's slap shot from the point got through traffic and past Mason to give the Blue Jackets a 1-0 lead with 11:37 remaining.

Giroux's one-timer from the top of the left circle went off Columbus defenceman Dalton Prout and through McElhinney's legs to tie it with 7:02 left.

Foligno scored the go-ahead goal with 2:50 remaining when Tim Erixon's pass found him wide open at the right post for an easy tap-in.

NOTES: Voracek, who also had an assist, tied a career-high with a point in his ninth straight game. ... McElhinney made his sixth straight start in place of Sergei Bobrovsky (finger). ... Philadelphia had won five straight at home. ... Columbus C Artem Anisimov (concussion) missed his seventh straight game. ... Blue Jackets D Jack Johnson returned after serving a three-game suspension for an illegal hit. ... Columbus D Fedor Tyutin (lower body) was injured in the third period and didn't return. He will be evaluated further on Saturday, Richards said.