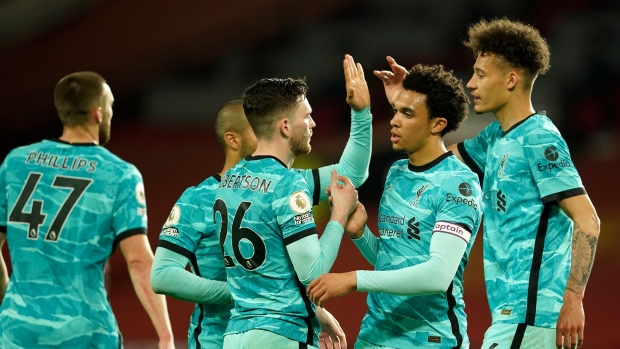 MANCHESTER, England (AP) — The beefed-up defense outside Old Trafford was more robust than Manchester United's on the pitch inside.

While United supporters again protested against the club's owners — facing riot police and new steel barriers to guard the entrances — the game against Liverpool went ahead as planned after being called off 11 days when some fans were able to storm the pitch.

United might have wished it hadn't, losing 4-2 for its first home defeat against its fiercest rival since Jürgen Klopp took charge of Liverpool six years ago.

The sloppy defensive display by United was more demoralizing than impactful given the club has a four-point cushion in second place with two games remaining.

But for Liverpool, which was playing its first game since its reign as champion was officially ended by Manchester City, the win means the reset target of just making the Champions League is still a possibility. With three games remaining, Liverpool is four points behind fourth-place Chelsea with a game in hand.

After Bruno Fernandes' deflected strike put United ahead in the 10th minute, Diogo Jota leveled and Roberto Firmino put Liverpool ahead in first-half stoppage time. A rapid impact within two minutes of the second half saw Jota extend the lead. Although Marcus Rashford pulled one back, Mohamed Salah curled in Liverpool's fourth in the 90th minute.

While United is unbeaten on the road, this was a sixth loss of the Premier League season at a home that will have the fans back inside next week for the first time since before the pandemic in March 2020.

In Thursday's other game, Everton moved into eighth place with a 0-0 draw at Aston Villa.