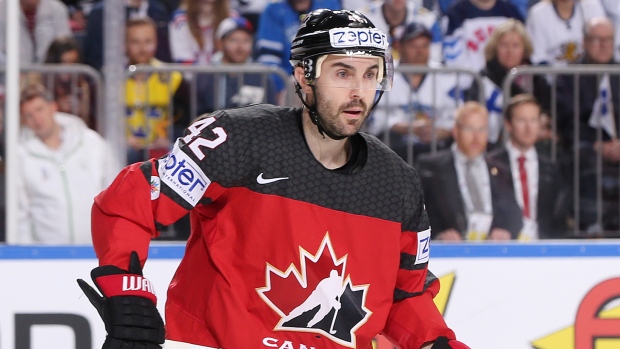 Just like Canada was the most talented team back then, Russia is likely to have that role at the upcoming Winter Olympics. Desjardins isn't concerned about that.

"In this tournament, anybody can win," Desjardins said.

No NHL participation for the first time since 1994 threatens to upset the traditional world hockey order after Canada has won the past three best-on-best tournaments: the 2016 World Cup, 2014 Sochi Olympics and 2010 Vancouver Olympics. Russia is considered the favourite because it has former NHL players Ilya Kovalchuk, Pavel Datsyuk and Andrei Markov, though Finland could make gold its sixth medal in the past five Games or Sweden could win for the first time since 2006.

Coach Tony Granato's American team was put together with players from European professional leagues, the NCAA and American Hockey League.

"This Olympics is wide open for a lot of reasons," Granato said. "Russia's got the most talented players in the world. They're going to have the team that steps on the ice with the most talented players. Does that make them the best team for two weeks? No. We all know that. We all know how sports works. All you're looking for is an opportunity to make the most and be the best that you can be for that period of time."

Because it's such a short tournament with three pool-play games, a qualifying round and then quarterfinals, it could come down to which team gels first after limited preparation time. Or maybe another goaltender will pull off what Latvia's Kristers Gudlevskis almost did when making 55 saves to give Canada a scare in the quarterfinals in Sochi.

"The goaltending matters, too, in an event like this," NBC Sports analyst Pierre McGuire said. "It always matters, but I think in this one, the underdog — if you have an elite goalie — can really do some damage."

Who's the underdog? It's fair to say host South Korea, in its first Olympics in men's hockey, fits that bill, along with Slovenia, Slovakia, Switzerland, Germany and Norway.

Yet being in a group with Slovenia, Slovakia and Russia is no easy task for the U.S., which boasts 38-year-old semi-retired captain Brian Gionta as its most experienced player. Granato said the U.S. "has lots of pieces that other teams and countries don't know about" and wonders if his team will be overlooked.

Mistake-prone play seems likely, though Gionta doesn't think there will be any lack of sizzle.

"I know there's been some talk that not having the NHL guys in, you don't have your high-skilled guys," Gionta said. "I think that's a bad representation of the people that are going over there and competing in these games. There's a lot of great hockey players."

ALL EYES ON DAHLIN

One of the most dynamic and offensively talented players is also the youngest: Sweden defenceman Rasmus Dahlin, who's projected to be the No. 1 pick in the NHL draft in June. Dahlin has 11 points in 29 games playing against grown men in the Swedish Hockey League and had six points in seven games at the world juniors. He's just 17.

WHO ARE THESE GUYS?

When the NHL announced it was out of these Olympics, executives from USA Hockey and Hockey Canada were quick to say every team would have 25 great stories. There are players on almost every team who are familiar because they played in the NHL at one point. Most of the rosters are made up of journeymen plying their trade in pro leagues in Europe, such as Czech Republic captain Martin Erat, Germany's Christian Ehrhoff and Canada's Ben Scrivens. Americans Troy Terry, Jordan Greenway, Ryan Donato and Will Borgen are currently playing college hockey.

"The tournament in general is going to be built with teams with lots of guys that this is the greatest event for them and they didn't necessarily think they were going to get this opportunity," Canada GM Sean Burke said.

WIN ONE FOR JOHANNSON

U.S. GM Jim Johannson's unexpected death at age 53 on the eve of the Olympics shocked the hockey world. Johannson glowed over getting to tell players they'd made the team, and in the aftermath of grief, USA Hockey hopes it can honour the longtime executive with a medal.

"If we ever had a win one for the Gipper moment, this is it," former executive director Dave Ogrean said.

If the Sochi Games proved anything, it was that the international-sized ice that's 15 feet wider than NHL rinks doesn't create more offence. The U.S. and Canada built rosters with the bigger ice in mind, prioritizing skating and mobility and playing a more European style. That doesn't mean European teams won't have an advantage, but it won't be such a stark change as when North American NHL players need a few games to get used to it.

The Olympic Athletes from Russia team is a favourite to win gold, which would be the first since the Unified Team in 1992. But Russia hasn't medaled since 2002, including a disappointing showing on home ice four years ago. The chance to draw all its players from the Kontinental Hockey League should benefit Russia, which has won four of the past 10 world hockey championships. But something about this stage has made Russia play like less than the sum of its parts before, which makes even a star-studded team beatable.